Home Archives Profile Subscribe
How not to miss the context of the New Testament
Thanks, Merci, Gracias, תודה, Ευχαριστώ, Tack, Vielen Dank

Can sacred texts be rescued from fundamentalism? 11-27-19

This past weekend here on the blog, I wrote about the Dead Sea Scrolls as a way of celebrating the importance of the written word, especially as that word has become sacred writ. 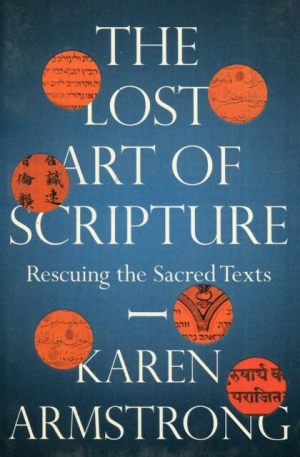 To continue that theme, today I am linking you to this review of Karen Armstrong's new book on scripture. Armstrong, as you may know, has written lots of intriguing books about religion. I haven't read her new book yet, but I can almost guarantee you that it will challenge some of what you think you know.

The new Armstrong book is called The Lost Art of Scripture: Rescuing the Sacred Texts. The review to which I've linked you calls the book "a tour de force of the history of religions."

And adds this: "Throughout this 'history of the world' (limited by not covering Africa, North and South America), Ms. Armstrong emphasizes that the sacred texts do not simply provide a list of 'do’s' and 'don’ts' that are most often directed to reward and punishment in the afterlife. She specifically details and analyzes sacred texts that also call for a 'radical transformation of mind and heart' of the individual. This is what she means by 'the lost art of scripture.' The increased fundamentalist readings of sacred texts to validate bigotry and violence against others (the left side of the brain) demonstrates this tragic loss."

One of the theological disasters of our time is mentioned there: "The increased fundamentalist readings of sacred texts. . ."

No sacred text was meant to be read in a completely literal way. Such texts contain poetry, metaphor, allegory, myth as well as sometimes real history. They are stories told for a larger purpose. If you never get past a literalistic reading, you really never get to the meaning.

But such straight-line thinking is what drove the 9/11 terrorists, the bombers of abortion clinics, the people who murdered Jews in synagogues and black Christians in a South Carolina church. That's the kind of thinking we must find ways to turn around. Maybe books like Armstrong's new one and even my last one, The Value of Doubt, can help.

Some Sikhs in a small town in India are raising funds to help Muslims there build a mosque. It's a great and welcome example of interfaith cooperation in a nation with a history of that but a nation that in recent times has often degenerated into needless religious rivalry spurred on by Hindu nationalism. Maybe in return, Kansas City area Muslims might want to help the local Sikh community build its new temple in Johnson County -- a project I wrote about here earlier this year.