How not to miss the context of the New Testament

Well, Tom Wright is at it again -- speaking truth in fresh and interesting ways. Or, at any rate, truth as he sees it. And the fact that I often (not always) agree with Anglican Bishop N.T. Wright makes it easier for me to think of his way of putting this as truth. 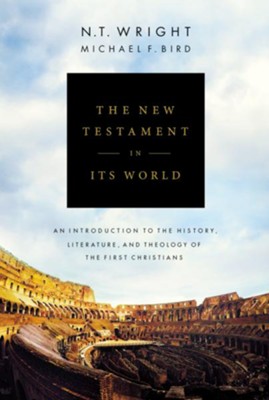 Wright has just co-authored a new book (he does that, it seems, about twice a week) that looks at the context of First Century Israel and the life of Jesus in that time.

It's called  The New Testament in Its World: An Introduction to the History, Literature, and Theology of the First Christians, and is co-authored by scholar Michael F. Bird.

RNS did this piece that described the heart of the book (I haven't had a chance to read its 1,000 pages yet) as he presented it recently to a church in Chicago.

The focus of the piece is on Wright's understanding of what Jesus meant when he began his ministry by announcing that the "kingdom of heaven is at hand."

As the RNS report notes, "Both progressive and conservative Christians misunderstand what Jesus meant when he said the 'kingdom of God is at hand,' he said.

“'Actually, the kingdom of God at hand means God’s kingdom coming in unexpected ways on earth as in heaven — not away somewhere else and not destroying earth, but transforming it.'”

I  sometimes explain it this way: Jesus meant that the reign of God is breaking in today and we can experience at least a taste of what that reign will look like when it comes in full flower. How? By living lives of justice, mercy, compassion and love and teaching others to live that way, too.

So the idea of the kingdom of heaven or the kingdom of God does not refer (at least exclusively) to the sweet by and by of the afterlife. It applies to this very day and of our duties, if we're followers of Jesus, to demonstrate what the kingdom will be like when it's finally and fully here.

Which is one more reason Christianity is such a difficult religion to follow faithfully and well. It requires something of its adherents every day, something that's not easy to do.

If you run into people who normally give me a gift for Christmas and want to mention Tom Wright's new book, I won't object.

Oh: And if you want a recommendation for another book that helps you understand the context of Jesus, here's one I have read (more than once), The Misunderstood Jew: The Church and the Scandal of the Jewish Jesus, by Amy-Jill Levine.

WHAT THE POPE SAID IN JAPAN

On his trip to Japan, Pope Francis declared that owning or using nuclear weapons is "immoral." I wish the calculus were that simple. It's true that the U.S. is the only nation ever to use nuclear weapons in war. But the evidence is overwhelming that use of them saved more lives than it cost, though there you have to factor in the reality that the lives saved were mostly American while the lives lost were mostly Japanese. And then you have to remember that it was the Japanese who were the original aggressors. See how complicated all this gets? In a perfect world, everyone would agree that nuclear weapons are immoral. The problem is that, so far at least, we don't live in a perfect world. I like the pope's instincts but let's all recognize that he's aiming for perfection.