Scroll down (or up) for a celebration of words 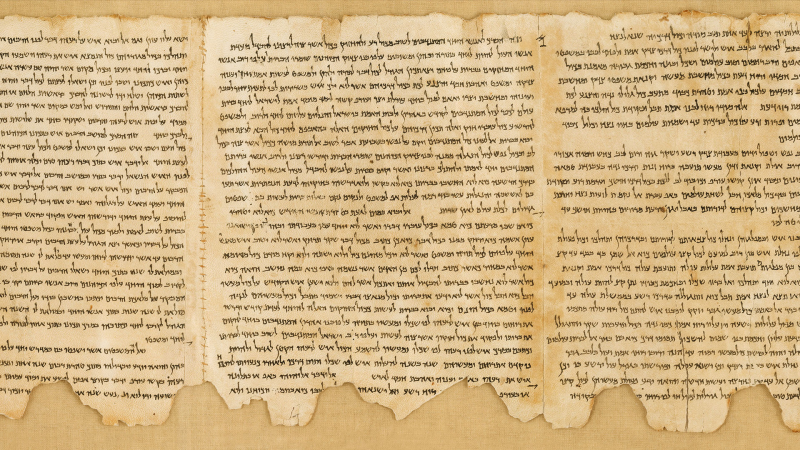 Depending on who is reporting the story, either Nov. 23 or Nov. 24 of 1947 was the date on which E.L. Sukenik of Hebrew University in Jerusalem first saw small pieces of the newly found Dead Sea Scrolls and recognized their great significance.

You can read about the scrolls and Sukenik at the links I've just given you, and I urge you to do that because the story of the discovery of them and how they made it into the hands of reputable authorities is fascinating.

But I want to use this subject this weekend to say just a few words about the centrality of words -- especially written words -- to faith traditions.

The first creation story in the Hebrew Bible describes how God used words to speak the whole cosmos into existence, starting with "Let there be light."

Eventually accounts of the people of Israel and their prophets were written down and came to be thought of as sacred scripture, sometimes called the word of God.

Similarly, the Gospel of John in the New Testament describes Jesus Christ as "the Word," a relatively weak but intriguing translation of the richer Greek word "logos." And, of course, the gospels and the rest of the New Testament eventually were recognized as sacred scripture by followers of this Jesus.

In Islam, some centuries after Christianity had divorced itself from Judaism, the beginning of the story also involves words -- ones said to have been dictated to the Prophet Muhammad by the angel Gabriel over more than two decades. Those words became the Qur'an, Islam's sacred scripture.

Words matter in almost all faith traditions, sometimes a great deal, and not just in written form. In a traditional Catholic Mass, for instance, what are called the words of epiclesis (or epiklesis), are spoken aloud to ask God to turn the substance of the elements of bread and wine in the Eucharist into the substance of the body and blood of Christ.

And yet the truth is that ultimately words fail us. Words cannot fully capture the divine reality, cannot say all about everything having to do with faith. But it takes words even to acknowledge that words fail us.

But as a commemoration of the discovery of the Dead Sea Scrolls, let's do what we can to honor sacred words this weekend. You'll be glad you did. I give you my word.

THE CASE AGAINST STEPHEN MILLER

A collection of Jewish organizations has accused White House senior adviser Stephen Miller of being a "white nationalist" and have demanded he be fired or that he resign. President Trump has hired a lot of incompetent people, but Miller may be among the worst  -- not for those reasons but for his repugnant ideas.

P.S.: I thought this article about the current troublesome state of religion in India might interest some of you. It's by my childhood friend Markandey Katju, a former justice on India's Supreme Court.

ANOTHER P.S.: My latest Flatland column now is online here.