A question raised by the picture of religion in Ukraine 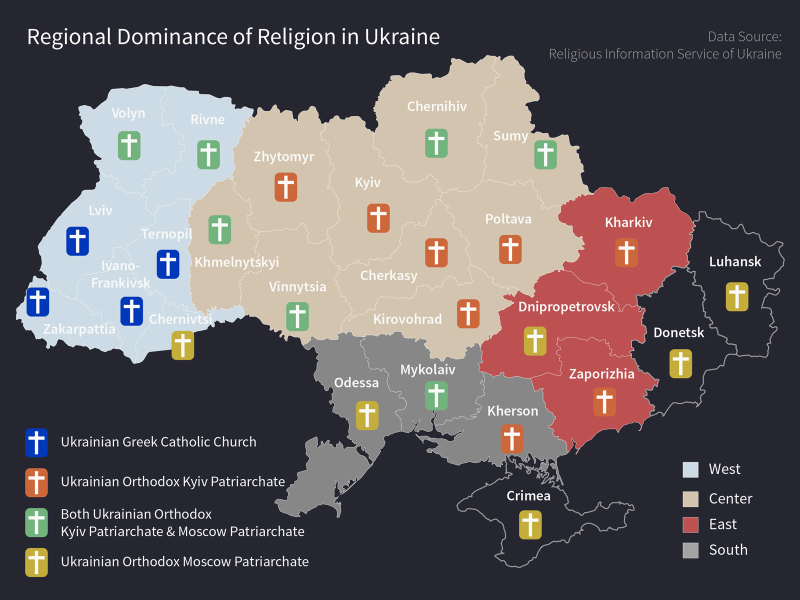 Do you now know a lot more about Ukraine than you ever imagined you would? Yeah, me, too.

I've been to Central Asia (Uzbekistan and, briefly, Kazakhstan) and Eastern Europe (Poland) but not to Ukraine, which I learned in the impeachment hearings is the European country (not counting Russia) with the largest land mass, about 360,000 square miles. Which makes it bigger than France, Spain and Sweden, the next three largest.

And I've learned that some seven percent of its land mass now is in the hands of Russia after Russian troops took over the Crimea (and about one-third of both Luhans'k and Donets'k oblasts) and are continuing to threaten the eastern boundary of our ally, Ukraine.

You can find that seven percent figure in the CIA Factbook page to which I linked you in the first paragraph above.

But what do we know about the religions practiced in Ukraine? And does that make any difference in how the government of Ukraine relates to the government of the U.S.? (Decent question, to which I don't have much of an answer.)

The CIA Factbook tells us that these are the religions practices in the country:

(Christian) Orthodox (includes Ukrainian Autocephalous Orthodox (UAOC), Ukrainian Orthodox - Kyiv Patriarchate (UOC-KP), Ukrainian Orthodox - Moscow Patriarchate (UOC-MP), Ukrainian Greek Catholic, Roman Catholic, Protestant, Muslim, Jewish (2013 est.)
note: Ukraine's population is overwhelmingly Christian; the vast majority -- up to two-thirds -- identify themselves as Orthodox, but many do not specify a particular branch; the UOC-KP and the UOC-MP each represent less than a quarter of the country's population, the Ukrainian Greek Catholic Church accounts for 8-10 percent, and the UAOC accounts for 1-2 percent; Muslim and Jewish adherents each compose less than 1% of the total population.

That's different from, say, Uzbekistan, where Islam is, by far, the dominant religion.

Here's another breakdown on religion in Ukraine from a travel site.

It's interesting that in the U.S. Commission on International Religious Freedom's latest annual report on violations of religious liberty around the world, Russia comes in for harsh criticism for the way it violates religious freedom in Ukraine: "In Russian-occupied Crimea, the Russian authorities continued to kidnap, torture, and imprison Crimean Tatar Muslims at will. Russian separatists in eastern Ukraine, often referred to as the Donbas, continued to expropriate church buildings and intimidate religious communities. . .In 2018, Russian occupation authorities in both Eastern Ukraine and Crimea continued to systematically persecute religious minorities in their efforts to maintain social and political control."

If any of that surprises you, you haven't been paying enough attention to Vladimir Putin's Russia.

The testimony of U.S. foreign service diplomats in the impeachment hearings has emphasized widespread corruption in Ukraine that the new president seems determined to stop. Why would there be widespread corruption in a country with a huge Christian majority of the population? It's a question Christians around the world should be asking themselves. Someone isn't getting the message.

THE END OF JAPAN'S 'HIDDEN CHRISTIANS'?

As Pope Francis prepares to head to Japan later this month, that country's so-called "Hidden Christians" are getting media attention, including this Reuters story. It reports that this interesting group of people believe their faith community may be coming to an end.