The history of religion in the U.S. is wildly complex and fascinating, and it includes stories about such home-grown religions as Mormonism, a term the Church of Jesus Christ of Latter-day Saints is trying to encourage people to abandon. (Good luck with that idea.) 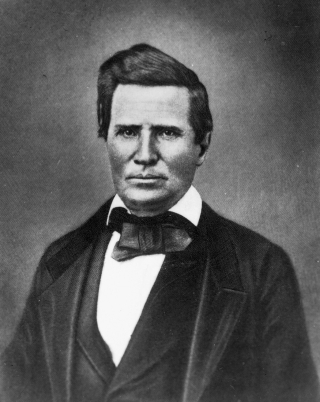 The LDS faith tradition traces its roots to Joseph Smith Jr., who founded it near Rochester, N.Y., in the early 1800s. You can read details of that history at the link I've just given you on Smith's name.

Eventually, Missouri (especially the Independence area) became the site of considerable Mormon activity and controversy, leading to what's called the Missouri Mormon War in the state in 1838.

Leading up to this unnecessary battle, a Missouri attorney, soldier and politician named Alexander William Doniphan (pictured here) had done his best to keep the peace and convince the powers-that-be that war with the Mormons was a foolish idea. But war happened anyway and eventually Doniphan, as a leader of the Missouri Militia, was ordered to execute the captured Smith. He refused and eventually became the defense attorney for Smith and other Mormons in a trial held in 1839.

Well, as I say, you can read lots of details about all this at the several links I've given you. But I needed to tell you at least that much about Doniphan as a way of introducing the news that the Alexander W. Doniphan Community Foundation and Mid-Contintent Public Library are working on a project in connection with Missouri's bicentennial to create a Doniphan anthology with a variety of pieces relating to him.

And you can be among those who write something for the planned book. As you may know, Missouri's bicentennial is in 2021, but the rules require that your work be done well before that. All of the details about that can be found in these pdf files that you can download: Download Doniphan Community History Project and Download Doniphan-add Your Story to Missouri Blog Post.

Similarly, information about the project can be found at this website and this one.

If you do decide to participate in this intriguing project -- especially if you focus on Doniphan's history related to Joseph Smith and the Mormons -- I hope you'll let me know.

OK. Get busy. And if you're reading this via Facebook, please share it to get the word out more extensively.

On the occasion of Yom Kippur, which began at sundown last evening, here is a terrific story of what a Jewish man learned from a Muslim. I'm happy to give this story a few more readers. You might want to share it, too.