Home Archives Profile Subscribe
Is your religious I.Q. up to speed? 10-7-19
You can help tell the Mormon story in Missouri: 10-9-19

From time to time over the years I've written about the possibility of life in the cosmos beyond Earth and whether there's room in whatever theology we hold to allow for such a thing. 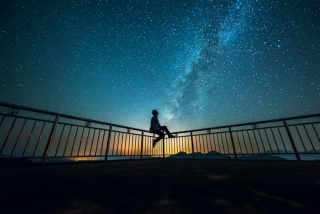 In other words, it's the old question of whether we're alone in the universe. And, if not, does that mean that life here on Earth is God's only life creation?

It's perhaps an even more relevant question today because, as this New Yorker article reports, the hunt for life elsewhere seems to be getting a boost.

The piece by Adam Mann says that Jason Wright, an astrophysicist at Pennsylvania State University, "is at the vanguard of a new movement in seti (the search for extraterrestrial intelligence). Its goal is the rationalization of a speculative endeavor. 'We’re trying to formalize it,' he told me. 'We’re trying to get a canon of papers that my peers have read and understood.'”

Early on in the search for life elsewhere, the odds against finding it seemed overwhelming. Not so anymore. As Mann reports, "By the early nineties, astronomers had confirmed the existence of only two planets outside our solar system. Today, they know of more than four thousand 'exoplanets,' and are discovering more all the time. Judging by their sizes and temperatures, many of these exoplanets could be capable of supporting life. The same is true within our own solar system. There is ample evidence that Mars, which was once considered a barren desert, was wet and warm in the past, and planetary scientists talk with some urgency about sending spacecraft to survey the oceans of the moons Europa, Titan and Enceladus. The idea that simple organisms, such as bacteria, might exist on other worlds seems eminently reasonable."

So the issue remains: Can our theology, whatever it is, account for life elsewhere? Or are we so human-centric that we can't imagine that we're not unique?

Scripture in different traditions may give indirect hints that might allow for life elsewhere. Jesus, for instance, said he had others in his flock elsewhere that he needed to attend to, though sometimes members of the Church of Jesus Christ of Latter-day Saints have suggested he may have been talking about them. And various scriptures of traditions beyond Christianity sometimes speak of God being the God of the cosmos, not just our small terrestrial ball.

But if life really is discovered elsewhere, theologians will have to do some more detailed work to determine more precisely what all that means.

I'd love to be part of those conversations, but for that to happen we're going to have to come up with some big discoveries before too long. I've already lived most of my life, after all. And all of it has been spent here on Earth, though I have managed to get to 30-plus countries and to have floated in airplanes above all or most of them. But Earth-limited frequent flier miles would amount to nothing compared to people commuting to and from Tralfamadore, a planet author Kurt Vonnegut once made up.

Pope Francis has appointed some new cardinals, meaning that he's now named more than 50 percent of the cardinals eligible to vote for the next pope, whenever that happens. In theological-political terms, this is called educating the Holy Spirit about who should be next in line.