Home Archives Profile Subscribe
Almost a year after Pittsburgh synagogue murders, what's changed? 10-4-19
Is your religious I.Q. up to speed? 10-7-19

For many Americans the name Gandhi refers to a universally admired Indian leader who helped to gain his country's independence through non-violent means. And certainly there is some truth in that assessment of Mohandas K. Gandhi, (pictured here) often referred to as Mahatma, meaning "great soul." 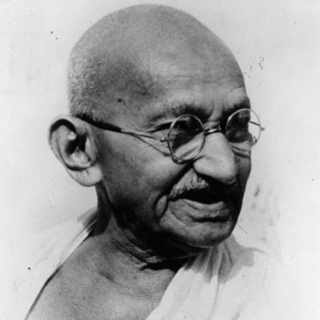 But as this interesting Washington Post story reports, as the world commemorates the 150th anniversary of Gandhi's birth, his reputation is taking some hits. A reassessment of Gandhi almost certainly will not destroy his reputation but perhaps that reputation needs to be taken down a notch or three.

"A century and a half after the birth of the revered leader of India’s independence struggle," the Post story says, "Gandhi and his legacy are getting an update — and much of it is not positive.

"Even as admiration for Gandhi remains widespread, aspects of his life and philosophy are increasingly a source of controversy. Scholars have highlighted the racist language he used as a young man living in South Africa as well as his defense of India’s caste system."

My childhood friend, Markandey Katju, a retired justice on India's Supreme Court (we were schoolmates for a time in India in the 1950s), has been an early adopter of the need to question Gandhi's unqualified greatness.

Back in 2015, for instance, he wrote this piece challenging the conventional wisdom about Gandhi. In it, he declared that Gandhi essentially was a British agent. For instance, Katju wrote this: "By constantly injecting religion into politics continuously for several decades, Gandhi furthered the British policy of divide and rule."

Katju also declared that "Gandhi's economic ideas were thoroughly reactionary. He advocated self sufficient village communities, though everybody knows that these communities were totally casteist and in the grip of landlords and money lenders. Gandhi was against industrialization, and preached handspinning by charkha and other such reactionary nonsense. Similarly, his 'trusteeship' theory was all nonsense and an act of deceiving the people.

"Some people praise Gandhi's bravery in going to Noakhali, etc., to douse the communal violence at the time of Partition (in 1947). But the question is why did he help set the house on fire in the first place by preaching religious ideas in public political meetings for several decades, which were bound to divide the Indian people on religious lines? First you set the house on fire, and then you do the drama of trying to douse the flames."
And here's a story describing Katju's Twitter feeds criticizing Gandhi.
The Post story isn't quite so direct, but it does say this, "In many parts of the world, 'Gandhi is seen broadly as a nice, decent, open-minded, reasonable guy who advocated nonviolence, justice, peace and so on,' said Ramachandra Guha, a historian and author of a two-volume biography of Gandhi. But in India, 'his ideas and legacy have been deeply contested.'”
The broader point here is to remember that if we are to tell the truth about some historical figure, it must be detailed and nuanced. Simply to say that George Washington couldn't tell a lie is to ignore much. Simply to say that Abraham Lincoln freed the slaves is to ignore much, too.
Was Gandhi's advocacy of religious pluralism helpful to his nation or divisive? A clearer answer to that question is emerging: yes, perhaps it was both. Unalloyed heroes sometimes have feet of clay. We'd do well to remember that about popes, presidents, preachers and even poets.
* * *

The American Academy of Religion has published what looks to be a really useful set of guidelines outlining what college students should know about religion. Religious illiteracy means ignorance, which can lead to bigotry and even violence. These guidelines are an effort to stop that cycle. Good.

P.S.: The Bahá´i Community of Kansas City is inviting the public to an October 26 free presentation by Layli Muro, founder of the Tahirih Justice Center, on "Justice through Social Action." The 3 p.m. event will be at the Bahá´i faith center, 6515 Independence Ave., in Kansas City, Mo. Details and to RSVP, download this pdf: Download Bahai-Invitation to Bicentennial