Can the pope's progressive instincts prevail? 10-31-19

The recently concluded Vatican bishops' conference on the Amazon provides an opportunity to reassess the papacy of Francis (pictured here). This Atlantic analysis does quite a good job of exactly that task: 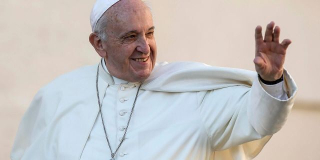 "The path Francis has been taking," the piece says, ". . .leads directly into a larger culture war, one that pits progressives against traditionalists."

Those labels, of course, hide as much as they reveal, but at times they're handy as long as we remember that Catholics don't easily divide into that binary system.

The pope's critics, the article notes, say Francis is "watering down Church doctrine. These critics tend to be defenders of (the former pope) Benedict, a brainy disciplinarian who advocated a smaller, more doctrinally pure Church, rather than a more flexible and inclusive one."

The Atlantic piece adds this: "In the culture war between traditionalists and progressives over the future of the Church, the pope may be on the progressive, inclusive side, but his traditionalist critics have access to social media, which has an outsize influence in shaping perceptions. . .

The church -- indeed, any institutional religion -- always struggles internally to stay true to what it perceives its core mission to be while seeking to attract people who may not understand that mission but have other needs. Pope Francis, who sits at the center of the institution, tends to look outward beyond the walls of the church to the wounded world he believes the church is called to serve. Some of his harshest critics sit near that same center but look inward in an effort to preserve what they have understood is the church's divine mandate.

In The Atlantic piece, one of those critics says this: “Is there anyone left who is actually worried about saving souls? But isn’t that why Christ died on the cross?”

Those are two heavily loaded theological questions that people of good will can debate and about which they can come to different conclusions. But if the church is dedicated simply to "saving souls," it raises the questions "from what?" and "for what?" Those questions should open up a conversation that takes seriously the needs of people (and the planet) outside the walls of the church. If that conversation doesn't happen -- and it's one Pope Francis regularly encourages -- then the church will turn inward and ignore its mandate to love this broken world and to work to repair it.

The questions quoted about saving souls and why Christ died reflect a limited theology that Francis is working to expand beyond one singular view of doctrine. I'm not a member of the Catholic Church, but I'm rooting for him in this work -- and have been since even before I co-authored the 2015 book Jesus, Pope Francis and a Protestant Walk into a Bar: Lessons for the Christian Church.

Baha’is around the world are celebrating the 200th anniversary of the birth of Siyyid Ali-Muhammad Shirazi, known to as the Báb, revered as the prophet who founded the Baha'i movement. In this RNS column, Anthony Vance, director of the U.S. Baha’i Office of Public Affairs in Washington, D.C., tells why the Báb continues to inspire people around the world.