The story of membership decline in Christian churches -- especially those in Mainline Protestant denominations -- is 50 or 60 years old. 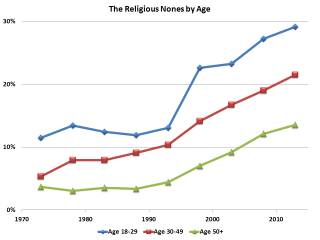 But that doesn't mean we understand all the causes or that the drop-off has been steady and consistent over the years. Again and again, scholars and other researchers -- and even journalists -- have sought to explain what's going on with this matter and why.

The latest effort can be found in this Atlantic article, which draws readers back to about 1990 and identifies three events or developments that a teacher quoted by the author, Derek Thompson, a staff writer for the magazine, considers key not just to membership decline but, more to the point, to the recent rapid growth of people who identify as religiously unaffiliated, the so-called "nones."

As Thompson notes, "the rise of religious non-affiliation in America looks like one of those rare historical moments that is neither slow, nor subtle, nor cyclical. You might call it exceptional." What happened to cause that?

"According to Christian Smith, a sociology and religion professor at the University of Notre Dame, America’s nonreligious lurch has mostly been the result of three historical events: the association of the Republican Party with the Christian right, the end of the Cold War and 9/11."

What was the result of the GOP connection? "The marriage between the religious and political right delivered Reagan, Bush and countless state and local victories. But it disgusted liberal Democrats, especially those with weak connections to the church. It also shocked the conscience of moderates, who preferred a wide berth between their faith and their politics. Smith said it’s possible that young liberals and loosely affiliated Christians first registered their aversion to the Christian right in the early 1990s."

What did the end of the Cold War have to do with changing the American religious landscape? Thompson's answer:

". . .it may have felt unpatriotic to confess one’s ambivalence toward God while the U.S. was locked in a geopolitical showdown with a godless Evil Empire. In 1991, however, the Cold War ended. As the U.S.S.R. dissolved, so did atheism’s association with America’s nemesis. After that, 'nones' could be forthright about their religious indifference, without worrying that it made them sound like Soviet apologists."

OK, but how did the 9/11 terrorist attacks add to the movement of some Americans away from religion? Again, Thompson:

"America’s next geopolitical foe wasn’t a godless state. It was a God-fearing, stateless movement: radical Islamic terrorism. A series of bombings and attempted bombings in the 1990s by fundamentalist organizations such as al-Qaeda culminated in the 9/11 attacks. It would be a terrible oversimplification to suggest that the fall of the Twin Towers encouraged millions to leave their church, Smith said. But over time, al-Qaeda became a useful referent for atheists who wanted to argue that all religions were inherently destructive."

I think Thompson and Smith are on to something here. But they're also missing some things. High on that missing list is the sexual abuse scandal in the Catholic Church, followed by sexual abuse scandals in other faith communities, including the Southern Baptists. The way church leaders have handled -- and are handling -- those troubles has been, for the most part, abysmal.

Beyond that, biblical and theological illiteracy have been in evidence in almost all branches of Christianity. And something similar can be found in other faith traditions, too. The result is that people often don't know when religious leaders are telling them bunk, such as the so-called Prosperity Gospel. When they finally figure out that they have been told sweet little lies instead of the difficult-to-follow Christian gospel of loving even one's enemies, they often just abandon faith.

No doubt there are other reasons for these shifts, too. But Smith's-through-Thompson are worth pondering.

(The chart here today came from this Patheos site.)

A LEADER WHO HONORS IMMIGRANTS AND REFUGEES

The Vatican has unveiled a new statue on St. Peter's Square dedicated to immigrants and refugees. And Pope Francis was present cheering on the idea behind the art work. Just for fun, can you imagine such a statue being unveiled on the White House lawn today? Yeah, me, either.