Home Archives Profile
Could France elect a Muslim as president? 10-14-19
Water's centrality in the journey of faith: 10-16-19

While working on the book I wrote with Rabbi Jacques Cukierkorn, They Were Just People: Stories of Rescue in Poland During the Holocaust, I read almost nothing but Holocaust-related books for nearly five years. 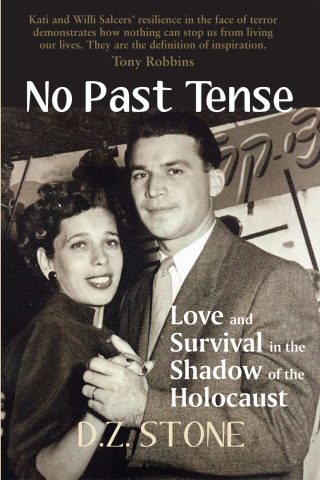 So perhaps it's not surprising that now I tend to avoid Holocaust books. And when I received a review copy of No Past Tense: Love and Survival in the Shadow of the Holocaust, my plan was to read just enough of it to be able to do a short item here on the blog to alert readers of its existence in case they wanted to read the whole of it.

But I wound up reading every word and I'm betting you will, too, if you get the book.

One reason is that it's written in a unique style that adds a great deal to the story of Holocaust survivors Kati Kellner Salcer (1928-2015) and her husband William (Willi) Zev Salcer (1924-2006), neither of whom ever wanted to tell their two children much about their Holocaust experiences. Eventually their son Ron pushed them hard enough that they agreed to be interviewed first by the Shoah Foundation and later by author D. Z. Stone, who has turned long hours of interviews with the Salcers into this book, four-plus years after Kati died and almost 13 years after Willi died.

What is unique about the style?

As Stone tells the story that she has learned from the couple, she intersperses her own narrative with a series of direct quotes in italics from Willi and Kati in a way that makes it seem as if they are commenting live on the narration as it moves along. I've not seen this done in quite this way before, but it's effective in letting the reader get into the minds of the couple. Yes, here and there the story gets a little repetitive because of this method, but on the whole it works well.

Willi and Kati were Czech Jewish teenagers when Hitler's Nazi killing machine began to murder the roughly six million Jews who died at the hands of the Germans. From Hungary in 1944, late in the war, Kati ended up at Auschwitz and Willi wound up at the Mauthausen concentration camp in Austria, which had been annexed by Germany. Both survived -- though most of their families did not -- and they found each other again after having known one another before the war. Their journeys took them to Israel after the war and eventually to New York.

All of that is overview, summary. What gives this book its power are the details. For instance, this:

In Mauthausen when Willi had something he needed to tell God, he decided he had to do it face-to-face and not from the bottom of a hellhole.

Not caring if one of the Ukrainian guards who used Jews as target practice shot at him, Willi crawled over the dead and dying and out of his tent. He had to speak to God and no one was going to stop him.

Under a cloudless night sky, Willi walked to a clearing in the camp and forced himself to stand up straight. He raised a fist to the stars, and from a voice that starvation had shriveled to a whisper, he found the strength to shout.

As the war was coming to an end and Kati was with other girls trying to find their way home, they spotted an SS man from the camp: "One of the Polish men had rope. Someone said let's hang him. Kati, along with the older girl and another girl from her group, joined the young Polish men to chase down the SS man."

Then Stone quotes Kati. But she does it as lines of poetry -- dark, bitter poetry. It ends this way:

When the noose was around his neck, I joined in

I held my hands on the rope

I pulled with everyone

I pulled and pulled until he was yanked dead

What did I feel?

Not the least bit of pity. Not a touch of remorse. No sympathy

For this man, all I felt was hatred

I wanted him dead

We rejoined our group

No one mentioned the SS man

We held hands and continued walking home towards Czechoslovakia

We walked through the woods at night

Afraid I had become a monster

In an age of Holocaust denial, which simply provides more proof of the fragility of human reason, books like this provide additional evidence of what happened because Hitler considered Jews vermin and the German people went along. That's reason enough to hope this volume finds lots of readers.

At the current Vatican summit of bishops on the Amazon, there has been pressure to allow the leaders of women's religious orders a chance to vote in various leadership settings of the church. Some things seem so reasonable that it's hard to imagine having to pressure anyone to do it.