For the last couple of weeks -- and for one more Sunday at my church -- Nancy R. Howell, who teaches at St. Paul School of Theology, has been leading one-hour classes called "Disappointed with God." 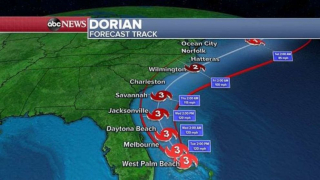 This has been in concert with a sermon series our pastors have been doing about skepticism and doubt, sermons that have been in harmony with my own last book, The Value of Doubt, in which I argue that doubt can be a road to faith and that the opposite of faith isn't doubt but, rather, false certitude.

Last week, as Nancy was dealing with the old theodicy question about why there's evil and suffering in God's good world, she sought to distinguish natural evil from personal or moral evil. In the natural evil category she put such storms as Hurricane Dorian, which created an almost-literal hell for the people of the Bahamas, to say nothing of the other damage it did elsewhere and the fear it continues to induce all along the east coast of the U.S.

There are lots of ways to think about natural evil -- floods, storms, earthquakes. One way is to remember that they are the result of a divinely created system that makes life possible because there are rules that govern nature. Without those rules, existence would be utter chaos and life as we know it would not be possible.

All of that is interesting and useful to think about, but much more important is the question of how we respond to any evil,  whether natural or individual. If, as the great world religions teach, we are built for relationship, then we are obligated to respond to the suffering caused by Dorian or by someone's murder in ways that help to relieve that suffering.

In the Christian tradition, we say we have a model in Jesus Christ, who relieved the suffering of illness and disease and who showed us how we are to act in such situations.

It's easy to ask why God would allow natural or moral evil as we watch Dorian do its damage. What's harder is to act in response to such evil because whenever any one of us suffers all of us suffer. Thoughts and prayers are fine, but they're never enough. Religion teaches us that we are the hands and feet of God here on Earth. If we don't act, God appears disinterested.

SPEAKING OF GOD, THEY DON'T MUCH

In this Religion News Service blog post, a researcher reports studying how often Democratic presidential candidates tweet about religion or God, and finds the answer is not very. He thinks that's a problem if the candidates want to appeal to a wide cross-section of voters. And he may be right.

Fans for the late Catholic priest, Henri Nouwen, will be delighted to know that a new collection of his essays has been gathered up and published. It's Following Jesus: Finding Our Way Home in an Age of Anxiety. As book editor Gabrielle Earnshaw writes at the end of the book, it is based on six talks Nouwen delivered in the Lenten season of 1985 at St. Paul Church in Cambridge, Mass. Because, as she notes, it was "an uncertain time" in Nouwen's life, he was struggling with the question of what it means to follow Jesus when living "in anxious times." Nouwen, thus, considers the call, the cost and the reward of following Jesus, and most of the time the reader of this collection, I predict, will not be able to predict what he'd say the call, cost and reward are. One thing I like about Nouwen is that he speaks so directly and yet so deeply. In the "cost" section, for instance, he writes this: "Death is so absurd. Who of us can really grasp it? We want life and yet there is a certainty of death. God wanted to enter with us into that absurdity of death and feel the human condition more fully and more totally than we can ourselves. He made it visible by dying the most absurd death. The Holy One naked on a cross between two criminals. That is the unspeakable mystery that we as Christians believe. But do we really?" This small volume would make an excellent guide for Christians as they move through the impending season of Advent, which anticipates the naked Holy One on the cross  becoming, first, the naked Holy One in a manger.