Home Archives Profile Subscribe
A day to question our work ethic: 9-2-19
Would this solve abortion and gun violence? 9-4-19

My former Kansas City Star editorial page colleague, Lee Judge, a cartoonist and sports writer, recently has written several blog posts from his visit to California to see his 94-year-old mother. (The photo here today, copied from his blog, shows Lee in line for God's great blessings. Or something.) 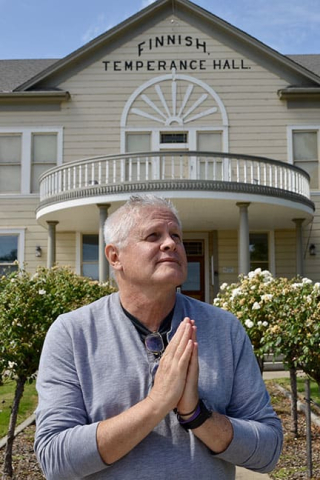 Lee's a funny guy who makes serious points in funny ways that often involve words you hope your young children or grandchildren never hear you saying.

In one of his posts, he described how he grew up in a home in which his mother sought to marinate him in a fundamentalist (and later Pentecostal) brand of Christianity. It didn't take. And in the post, Lee described what it is about religion today that turns him off:

"All those evangelists who stand up there in thousand dollar suits, drive home in Cadillacs and ask people on welfare to send them money are gold-plated a. . .s and I’ve watched them take advantage of people like my mom all my life."

"Nobody is in charge, making things right or fair, nobody is protecting little children from harm and there are no rules to follow that will guarantee you eternal life. Life is short and random and only as good as we make it.

"I think wasting the one life you get to live worrying about what some non-existent God thinks about rock and roll, short skirts, premarital sex and the consumption of barbequed ribs is f. . .d up.

"For me, I try to have fun and not hurt anybody in the process and even those two simple goals are hard to meet."

I wish Lee had had a better experience with people whose faith moves them to do beautiful and generous and life-affirming things -- because those people exist, and they draw much of their strength from their religious tradition. But Lee is far from alone in expressing what he does about religion.

As this recent New York Times opinion column notes, one problem is that the uplifting people I just described don't get much press, but the people Lee calls a. . .s do: "What you hear about is the phonies, the charlatans who wave Bibles, the theatrically pious, and they are legion. Vice President Mike Pence wears his faith like a fluorescent orange vest. But when he visited the border this summer and saw human beings crammed like cordwood in the Texas heat, that faith was invisible."

"What you hear about are the modern Savonarolas. In Indiana this summer, Archbishop Charles C. Thompson stripped a Jesuit prep school of its Catholic identity for refusing to fire a gay, married teacher. The same threat loomed over another Indianapolis school, until it ousted a beloved teacher with 13 years of service. He was fired for getting married to another man — a legal, civil action. The archbishop claimed he was upholding Catholic teaching, an example of the kind of selective moral policing that infuriates good people of faith."

There are, of course, corrupt politicians, but that doesn't make them all corrupt. There are swindling accountants, but. . . You can expand this list for a long time along the pattern I've started.

The thing is, it's up to religion to clean up its own house. When this or that faith community fails to do that, it damages all of religion in the very way that by backing a man with no moral center, white evangelical Christians have done severe damage to their own tradition and have, in a broader sense, damaged religion itself. As their hero would say: Sad.

THE BIBLE VS. THE GOP

Sticking with the subject today, this opinion piece in The Hill argues that there's a stark contrast between GOP policies and biblical standards: "Republican policies favoring the ultra-affluent, however, stand in stark contrast with biblical scripture. The Bible’s condemnations of the wealthy and the accumulation of riches leave zero room for ambiguity." Give it a read and see if you agree.