Home Archives Profile
How congregations can help us heal: 9-20-19
What the Jewish Community Center expansion means: 9-23-19

For centuries, many branches of Christianity (and some other faith traditions, too) have used the idea of eternal punishment in hell for sinners (including, in some traditions, unbaptized infants who died before even having had a chance to sin) as a tool of fear and control. 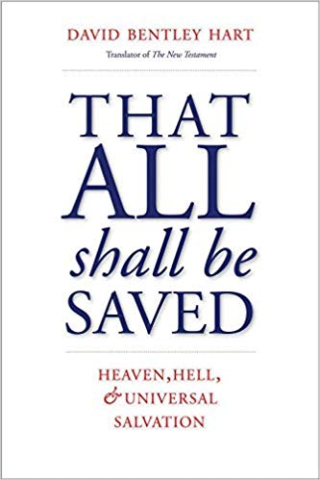 In his extraordinary and important new book, That All Shall Be Saved: Heaven, Hell and Universal Salvation, David Bentley Hart, an Orthodox Christian scholar, makes a strong argument that it's long past time for that theological manipulation to end and that, in fact, it never should have begun.

The primary reason, he asserts, is that such eternal punishment is in the cards for no one because a hell like that simply doesn't exist. Never has. Never will. Everything about the incoherent idea of such a hell is, he says, a repudiation of the nature of the very God whom Christianity confesses as universal lord and savior -- not savior just of some but redeemer of the whole cosmos.

And he makes this argument not by throwing out the biblical witness but by taking that witness seriously.

Hart, whose previous work was his own engaging 2017 translation of the New Testament, seems incapable of writing an uninteresting sentence. His use of words you've never seen in print before may drive you to distraction on occasion, but if you bother to look up those words you discover he has used exactly the right word each time. In fact, it's quite uncanny.

So this isn't an especially easy read for the average person in the pews of the average Christian church, but it's a crucial read nonetheless.

Many such Christians grew up in the way Sister Jean Prejean writes about her growing up years in her new book, River of Fire: My Spiritual Journey.

In her childhood, she writes (in the present tense), "I'm scared to death of hell, and it's going to take me a long time to break free of the fear. . .In my formative years, fear of hell is so interwoven into Catholic teaching that almost subliminally, no matter how much God's loving mercy is talked about, the Big Fear always wins, hands down."

Against that Big Fear, Hart asserts that in the first few centuries of Christianity, the "universalists," meaning those who believed that all would be saved no matter what, were quite prominent. But "over time, of course, in large part as a result of certain obvious institutional imperatives, the voice of the universalists would dwindle away to little more than a secretive whisper at the margins of the faith, except in a few of the sunnier quarters of Christendom (such as the East Syrian church)."

Hart usually is more direct than when he uses the phrase "certain obvious institutional imperatives." What he clearly means by those words is that the church needed some way to instill terror about hell into the hearts of followers so they would continue to need and support the church for their personal salvation.

Although Hart maintains a nice sense of humor and irony about this subject, he is nothing if not direct in his opinions: ". . .if Christianity taken as a whole is indeed an entirely coherent and credible system of belief, then the universalist understanding of its message is the only one possible. And, quite imprudently, I say that without the least hesitation or qualification."

In what I've written here so far, I've covered just up to page 3 of a 200-plus page book. But the message already is clear: Eternal punishment in hell is a cockamamie idea that needs to be jettisoned. However, if you just quickly buy that argument and walk away, you'll miss page after page of fascinating exegesis in which Hart tries to leave no room for any supportable rebuttal. To either agree with Hart quickly and move on or to condemn him immediately as a heretic would be a cheap, inadequate response to a deeply serious work that should be discussed in detail in all corners of Christianity (to say nothing of other faith traditions that also make room for the idea of everlasting punishment).

One reason for such a conversation is that Hart is not the first in modern times to dismiss hell. As this National Geographic piece reports, scholars increasingly are questioning what -- and whether -- hell is, even as belief in hell declines among Christians. One fairly recent (2010) book challenging traditional views on this subject is Razing Hell: Rethinking Everything You've Been Taught about God's Wrath and Judgment, by Sharon L. Baker.

Early in the book Hart lays the groundwork for his no-hell position by arguing that "the very notion that a rational agent in full possession of his or her faculties could, in any meaningful sense, freely reject God absolutely and forever is a logically incoherent one. Another is that, for this and other reasons, a final state of eternal torment could be neither a just sentence pronounced upon nor a just fate suffered by a finite being, no matter how depraved that being might have become." 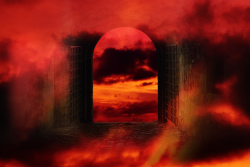 The punishment, in other words, must fit the crime. And eternal torment is never a proportionally just sentence. To imagine that it ever could be, Hart argues, is "to mistake the contradictory for the paradoxical, and thereby to accept incoherence as profundity or moral idiocy as spiritual subtlety."

But before Hart completely dismisses the broad idea of hell, he says he can conceive of something we might call hell: "I do believe that the only hell that could possibly exist is the one of which those Christian contemplatives speak: the hatred within each of us that turns the love of others -- of God and neighbor -- into torment. It is entirely a state we impose upon ourselves. And the only Christian narrative of salvation that to me seems coherent is the one that the earliest church derived so directly from scripture: a relentless tale of rescue, conducted by a God who requires no tribute to win his forgiveness or love. Any other version of the story I regard not only as an exegetical and conceptual error (though certainly that), but also a rather sickly parody of the Christianity of the New Testament."

Yes, Hart says, people sin and violate God's loving and just standards, but "a retribution consisting in unending suffering, imposed as recompense for the actions of a finite intellect and will, must be by any sound definition disproportionate, unjust and at the last nothing more than an expression of sheer pointless cruelty." The God Christianity worships, he insists, is incapable of such capricious sadism. Nothing about that kind of God would be, in Christian terms, good news. Such a god would be, Hart says, a "metaphysical absurdity."

Hart is particularly hard on the theology associated with the Reformed Tradition (read Presbyterian, my denomination) because although that tradition is consistent in teaching that God is always and forever sovereign over all things, it argues, in Hart's words, that "God could have created us for everlasting torment if he had so wished and it would have been perfectly just for him to do so simply because it lay in his power." But, Hart says, when John Calvin made that argument it "was the product of centuries of bad scriptural interpretation and even worse theological reasoning." Any writer who dismisses Calvin in that way lacks nothing in the way of self-confidence.

Hart's argument also focuses on the essential character of God: "Because he is the Good itself, God cannot be the author of absolute injustice, absolute evil; such an irrational possibility would be a limitation upon the infinite freedom with which he expresses his nature. . .So we should really stop telling such sordid lies about him." In the end, he argues, "the God of eternal retribution and pure sovereignty proclaimed by so much of Christian tradition is not, and cannot possibly be, the God of self-outpouring love revealed in Christ."

If Hart is hard on the Reformed Tradition, he's also hard on everyone who insists on sticking to a belief in eternal torment for sinners. It shows, he says, "the way in which Christians down the centuries (and I like to think, Western Christians with a special genius) have excelled at converting the 'good tidings' of God's love in Christ into something dreadful, irrational and morally horrid." What the traditional teaching about hell amounts to, he insists, is "sheer moral squalor."

Oh, and Hart also rejects the "annihilationist" position, which suggests that instead of assigning wicked people to hell when they die, God simply destroys any trace of them. Such destruction would not constitute the victory of God in Christ over death, Hart says. Rather, it would amount to "an almost farcically drab, depressingly ambiguous anticlimax."

Belief in an eternal hell is based on fear, Hart says, and "fear is a majestically potent instrument." Perhaps that's why it has been found so useful. Still, Hart writes, "my conscience forbids assent to a picture of reality that I regard as morally corrupt, contrary to justice, perverse, inexcusably cruel, deeply irrational and essentially wicked."

Clearly Hart has fired Satan as a property manager, given that in his view there no longer is any property to be managed -- and never has been.

(In my next Flatland column, scheduled to post on Sunday, Sept. 29, here, I'll describe how Kansas City area seminaries are reacting to such challenges to hell in what they teach students. Also: Last Sunday, my pastor, Dr. Paul T. Rock, preached this sermon on hell. Normally it would be a video recording, but an equipment problem prevented that, so it's just the audio. But it's well worth a listen.)

Several plans for how to resolve the division in the United Methodist Church over LGBTQ issues have been finalized and will be considered at a church-wide gathering next May, RNS reports. The goal, the story says, is " an amicable, and orderly, breakup of a worldwide church." How sad that the church's decision earlier this year to keep its anti-LGBTQ stance is resulting in this terrible model of disunity. For details about this whole matter, I refer you to the columns and blog posts I've written about this here and here and here .