Home Archives Profile Subscribe
A new picture of Karl Marx and his Jewish background: 9-18-19
How congregations can help us heal: 9-20-19

A century later this book still finds our hearts: 9-19-19

Because the date today has two 19s in it, it's a good time to write something about a book that was published 100 years ago in 1919 -- Winesburg, Ohio, which was written by Sherwood Anderson. 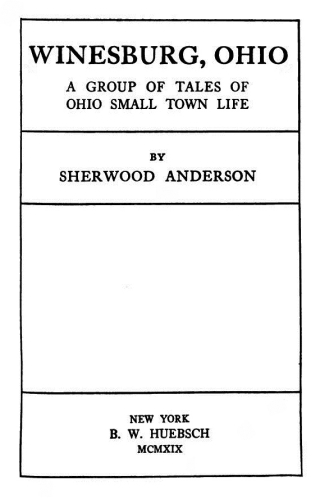 Well, mostly I'm going to connect you with this terrific essay about the book written by Joel Kurz, a friend who is pastor of Bethlehem Luther Church, a Missouri Synod Lutheran congregation in Warrensburg, Mo.

What Kurz has to say about the book not only is interesting and well said, but it speaks, by indirection, to what healthy communities of faith can provide to people. I'll get to that in a minute.

"I was," he writes, "struck by its magnificence but also troubled by what I saw as its heresy. When I read it again in my thirties, I was convinced that every ministerial student needed to read it in order to gain a better grasp on the individual variables present in human community. When I read it again last year, toward the end of my forties, I was simply broken in the presence of truth."

(Similarly I've read Mark Twain's Huck Finn more than a dozen times and each time I find something new, something deeper, something revelatory.)

In Winesburg, Anderson explores the wounded, sometimes-desperate lives being lived in small-town America. Because it appeared right after World War I, it reflected the reality that this brutal war ripped way the illusion that humankind was perfectible. Clearly humanity (at least human nature) wasn't -- couldn't, it was now clear -- get better and better. Clearly humanity was full of flaws that led to this global catastrophe. The poet Ezra Pound wrote that the war was fought for "a botched civilization," for "an old bitch, gone in the teeth."

Some of that is visible in the lives Anderson describes in his book.

As Joel writes about one character in the book, "Discontent with her squandered past and withering present, Elizabeth ekes her way through life until one day she becomes paralyzed — 'only her mind and her eyes alive' as she thinks of her son and struggles to say something about her hopes for his future."

As Joel read more about Anderson's personal struggles in life, he came to see all of that reflected in some of the characters in the book:

The personal, marital, financial, and artistic struggles that culminated in Anderson’s 1912 breakdown are there in Alice, the jilted store-clerk feebly trying “to get a new hold upon life,” whose “mad desire to run naked through the streets” on a rain-soaked night gives her renewed courage to face “the fact that many people must live and die alone.” Those struggles are in Elmer, the distraught business-owner, who tries to leave it all and finds himself alone, muddy, and cold — “miserable in body and in mind” — while trying to build a fire in the dark of night. Those struggles are in Ray, the fifty-year-old farmhand, who feels tricked and made a fool of by his existence, yet is so in awe of the countryside’s beauty that he runs across the field shouting “a protest against his life, against all life, against everything that makes life ugly.” They are in Tom, the gentle yet soul-scarred young loafer and workman who “could not hate anything,” who drinks to feel, who wants to be hurt and suffer with others but detests doing wrong and hurting someone to suffer. Anderson’s own struggles are in Elizabeth, George’s mother, who in a moment of fevered despair “wanted to get out of town, out of my clothes, out of my marriage, out of my body, out of everything” — who wants to run away from everything but “towards something too.”

What struck me as I read Joel's reflections on Anderson's book was that one can find such lives all around us still today. And the task of faith communities, such as Joel's and mine, is to minister to the people leading those lives. That requires that we get to know each other, that we are honest with each other about our struggles, our doubts, our failings as well as our joys.

Healthy faith communities provide the space and time for that to happen. Unhealthy ones want those details hidden away so that the institution can function efficiently and not have to be entangled with the messiness of life.

That, I think, is what Joel means when he writes that Sherwood Anderson asks readers "to wrestle with the scarred and sacred, the profane and praiseworthy, so that by caring about everything one arrives at a hard-earned and awe-filled knowledge that transforms every detail of living."

I tasted Winesburg long ago. I'm thinking that this coming year, instead of rereading Huck Finn again, I need to follow Joel's example and let Anderson's book speak to me.

A FRESH LOOK AT WHAT JUDAISM OFFERS

Sarah Hurwitz, a speechwriter in the Obama White House, has written a new book not about those years but, rather, about her rediscovery of Judaism. Its long title is Here All Along: Finding Meaning, Spirituality and a Deeper Connection to Life — in Judaism (After Finally Choosing to Look There). RNS has done this interesting interview with her about that. In it, she says this: "Judaism offers a tremendous amount of really sophisticated theology that a lot of people would really benefit from learning about. So I wanted to share it because it certainly was incredibly meaningful to me." It's also true that other faith traditions offer lots of "really sophisticated theology." The question, finally, about that theology is whether and how it drives people to live moral and useful lives.