A fascinating story about religion is playing out in India, raising questions about why interfaith education and respect for traditions beyond one's own create so much fear. 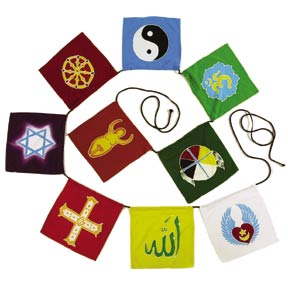 As Religion News Service reports in this story, "Chacha Nehru School was founded 19 years ago with the idea of educating underprivileged children of India’s two predominant faiths in the fundamentals of both Islam and Hinduism" in the north-central town of Aligarh.

"The approach has always been an anomaly in this city whose large Muslim minority prefers to send its young people to Islamic madrassas," RNS reports. "But as India’s religious divide becomes increasingly political with the rise of the Hindu nationalist Bharatiya Janata Party (BJP), Chacha Nehru has become a sore spot for Muslims and Hindus alike."

The BJP, under Prime Minister Narendra Modi, has been a divisive force that almost always and everywhere privileges Hindus, who make up nearly 80 percent of the population of India, against Muslims, who make up just over 14 percent.

The Aligarh school is trying to teach the students to understand a faith tradition beyond their own and to respect followers of that other tradition. A worthy goal.

The reaction to this approach? RNS: "Rashid Ali, the school’s principal, said the school has long been the target of attacks, with frequent inquiries made about whether it was a terrorist camp. Children’s books have also been allegedly scrutinized to understand its educational curricula. In 2017, rat poison was found in the school’s water cooler."

This is what you get when fear and the desire for political power drive the agenda.

I find the school's approach admirable, but I hope school leaders aren't trying to teach the idea that all religions are, in the end, the same and that it doesn't matter what religious choice one makes. Rather, my hope is that they are teaching children to understand and respect their own tradition first and then to learn about another tradition. Smooshing two religions into one is called syncretism. "Smooshing" is the technical word for amalgamation. I think.

Each religious tradition can bring strengths and insights not available in others. So mashing them together results in a loss.

Teaching children to live in peace with others from traditions beyond their own should be one of the goals of education. That this approach is producing fear and backlash in India is a testimony to the need for this kind of education.

LIBERTY U. STUDENTS ARE TAKING NOTICE

The other day here on the blog I wrote about the trouble that the Rev. Jerry Falwell Jr. finds himself in at Liberty University, where he serves as president. Now Liberty students are beginning to react to reports of his misconduct, and it's uncertain whether, if students really get motivated and organized, he can overcome their opposition.