Home Archives Profile Subscribe
A 9/11 plea for theological modesty: 9-11-19
How our government mislabeled a whole people: 9-13-19

One reason many young people walk away from religion is that they see within it examples of behavior and thinking that is clearly hypocritical, which is to say radically out of step with the moral values supposedly taught by that religion. 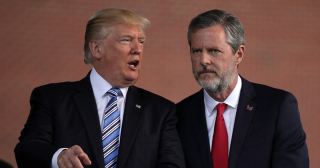 We certainly see that in the overwhelming support that white Christian evangelicals gave to Donald Trump in the 2016 presidential election, considering how nearly the whole of Trump's life has been a rejection of the values those evangelicals at least have said they hold dear.

Now, in a somewhat related matter, this long, detailed, fascinating Politico article describes how there's "a culture of fear and self-dealing" at Liberty University, whose president is Jerry Falwell, Jr., one of Trump's early and most dedicated evangelical supporters. (That's Falwell with Trump in this photo.)

The reporter, Brandon Ambrosino, is a former Liberty student who somehow managed to get current and former Liberty people to speak to him about what experts think are legally shady dealings going on under Falwell's leadership. Falwell himself answered many questions about all this that Ambrosino asked him, but most of those answers seem, at least to me, to be inadequate and self-serving.

"Based on scores of new interviews and documents obtained for this article, concerns about Falwell’s behavior go well beyond that — and it’s causing longtime, loyal Liberty University officials to rapidly lose faith in him."

Falwell, who, unlike his famous father, is not a pastor, has been at the school's helm while it has grown rapidly. And he has assumed the role his father once occupied of being a national political leader backing candidates and causes that are widely identified as conservative.

What the Politco article makes clear, however, is that Falwell's recent behavior in business and personal dealings has put his own and the school's reputation at considerable risk, and some of that has to do with his unwavering support for Trump.

Whether Falwell can survive all this by keeping his job as university president and his self-assigned role as political leader isn't yet clear. What is clear is that he's adding to the values-bending reputation that white evangelical Christians have acquired -- the kind of reputation that does damage not just to evangelical Christianity but to both Christianity and religion generally. When people look for models of how to live authentically moral lives but find, instead, people of faith living out of sync with their own expressed values, there's no reason for the seekers to attach themselves to that faith. That's the damage that Falwell appears to be doing.

(The photo here of Trump and Falwell came from this site.)

ACKNOWLEDGING A CONNECTION TO SLAVERY

An Episcopal seminary in Virginia has created a $1.7 million reparations fund as a response to the reality that the school has direct ties to slavery. This is a good and bold move in a time when the idea of reparations -- whether monetary or otherwise -- is divisive. I last wrote about the subject in this blog post earlier this year. But just being aware of the history of how slavery is connected to our institutions, particularly those religious in nature, is a good first step toward healing our continuing racial divide.

In a country divided by race, religion, economics and politics, it's increasingly easy to live in our own silos. People outside of our silos can slowly become invisible to us. In his new book, I See You: How Love Opens Our Eyes to Invisible People, Terence Lester teaches readers not just how to see people they often ignore -- especially those in poverty -- but also the many benefits of doing so. He acknowledges how easy it can be "not to see people faced with extreme hardship" because "the moment we choose to acknowledge someone in pain, we have to decide whether we will respond with love, generosity and grace." In focusing on poverty -- a condition Lester himself has faced -- it's important, he writes, to acknowledge that "every story of poverty is different, unique and surprising. People arrive in these situations in myriad ways. The types of poverty are also diverse: physical (lacking a home or clothing) and spiritual (lacking connection, purpose, family or love)." When we view poverty as somehow just about politics, theories and numbers, he writes, "we forget we are talking about living and breathing people who matter to God." His answer? "Put yourself in someone else's shoes. Find out what they need. Tell them you see them. Show them you're there. Tell the broken, weary, poor and lonely that they're not alone." Wise advice set in a Christian context.