Home Archives Profile Subscribe
Why silence is not an option against bigotry: 9-10-19
How Jerry Falwell Jr. is damaging faith: 9-12-19

On this 18th anniversary of the 9/11 terrorist attacks, I will, of course, be thinking about the murder that day of my nephew, Karleton D. B. Fyfe, a passenger on the first airliner to smash into the World Trade Center. But, then, I think about him every day, anniversary or not. 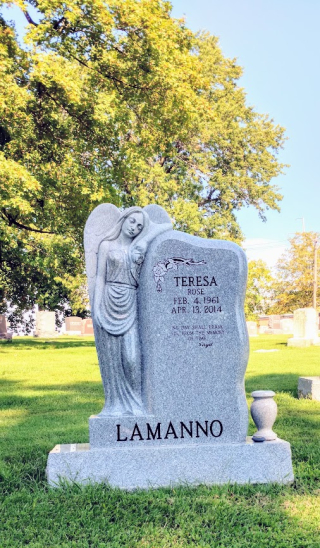 Today, though, I want to broaden the picture a little bit from focusing on terrorism caused by Islamists, such as the theological thugs who pledged allegiance to the radically distorted brand of Islam adopted by Osama bin Laden and his ilk.

I want us today to remember that we in the Kansas City area have evidence around us of domestic terrorism, and of quite recent vintage, too.

I was struck by that reality the other day when I went for a walk in cemeteries near which I live. One of them is Calvary Cemetery at 69th and Troost. Not long after I entered the grounds I came across the grave (pictured here) of Teresa (Terri) R. LaManno, one of three people who died April 13, 2014, at the hands of a neo-Nazi, who also murdered the father (William Corporon) and son (Reat Underwood) of Mindy Corporon, about whom I last wrote here.

In response to the killings, Mindy and Jim LaManno, Terri's widower, together have created the annual Give Seven Days events in Kansas City to stress the need for love and respect. Their efforts have been a gift to the region.

So just a few blocks from my house is this monument memorializing the life of someone struck down by a hatred rooted in the certainty that Jews are vermin and should die (though, of course, the three people the shooter murdered that day weren't Jews at all, but Christians).

The antisemitic garbage that infected the killer's mind was in many ways rooted in the same kind of theological madness -- false certitude -- that misshaped the thinking of the 9/11 terrorists.

I wish I knew just what it would take to rid the world of theological arrogance. There is no subject more important than God and how to grasp something about the impulse of love behind God's creation. But the truth is that our ability to know the infinite is so severely limited that it's arrogant to say anything at all about God. Because we must say something, however, we should always remember that whatever we say will be incomplete and perhaps distorted.

In fact, it would behoove preachers to start every sermon this way: "Everything I'm about to tell you may be wrong."

That kind of humility is what will prevent the false certitude that leads to violent extremism. But humility -- one of the Benedictine virtues -- is a hard sell these days, whether in religion or in politics.

But maybe just for today -- in memory of those who perished on 9/11 and in memory of the victims of the kind of domestic terrorism that ripped lives away from the LaManno and Corporon families -- we can try to show a little theological humility. We all are theologians, whether we want to be or not. But maybe today we can be what the late theologian and author Shirley C. Guthrie told us we need to be -- "modest theologians."

(By the way, this Boston Globe opinion piece pretty accurately describes what 9/11 and the wars we've fought since have really cost us. It's all breath-taking, sorrowful and mostly unnecessary.)

CHURCH CANCELS A PLATFORM FOR HATE

A Detroit area church, under pressure, has cancelled a two-day anti-Islam event timed to coincide with this year's commemoration of the 9/11 terrorist attacks. The church's pastor bragged this: "I am an Islamophobe, I wear that badge proudly." Here's one more misguided person who, rightly wanting to be against terrorism, imagines that means being against Islam. Have some people learned so little in 18 years? Clearly.

P.S.: To go along with my plea for theological modesty today, I invite you to a four-week series of one-hour classes at my church called "What Christians Should Know About Other Religions." Representatives of Islam, Buddhism, Judaism and Hinduism will speak at 8:30 a.m. on successive Sundays starting Sept. 29. Details are in this pdf: Download Second classes