Home Archives Profile Subscribe
What to do with pastors who are unfaithful in marriage? 9-9-19
A 9/11 plea for theological modesty: 9-11-19

Antisemitism, sometimes referred to as humanity's oldest hatred, has been resurgent in recent years -- not only in the U.S. but around the world. 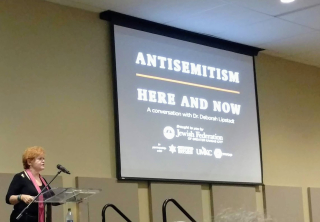 In fact, when I say "recent years," it was more than six years ago that I reviewed Alvin Rosenfeld's then-new book, Resurgent Antisemitism, for The National Catholic Reporter, a review that seems no longer to be available online.

Since then we've seen quite a few horrific examples of antisemitic violence in the U.S. and abroad, including the murders in 2014 at the Jewish Community Center and Village Shalom in suburban Kansas City.

So it's no surprise that Prof. Deborah Lipstadt (pictured here), an expert on antisemitism, continues to be in demand as a speaker around the country and the world. (She teaches modern Jewish history and Holocaust studies at Emory University in Atlanta.) Late last week she spoke in Kansas City about antisemitism at an event sponsored by the Jewish Federation here and other agencies, and I want to pick up on one of her points here today.

She spoke about the origins of antisemitism, and noted that at least some, if not most, of it goes back to the way the gospel writers of the New Testament told the story of Jesus' arrest and crucifixion.

"I find the roots in the New Testament," she said, "and the way -- and I want to be very careful here -- the way in which the story of the crucifixion of Jesus was used. It didn't have to be used in that way, but the way it was used, particularly. . .the way it was used by certain church leaders and church fathers as they were differentiating Christianity from Judaism and as they were building up Christianity. One of the things they wanted to do is to say, 'We are different from the Jews, we are better than the Jews, we are an advancement on Judaism."

Lipstadt particularly noted the story of Jesus chasing the money-changers out of the temple in Jerusalem, suggesting that it contains the template for several now-prominent features of modern antisemitism: The Jewish leaders may have had a financial interest in having them there; the Jewish leaders, however, had enough influence with the Roman leaders that they talked them into crucifying Jesus. The story the gospels tell about this, she said, contains these elements: "money, power and cunning."

And those are the elements that often lie at the base of today's antisemitism, in which Jews are presumed to care only about money, presumed to have enormous conspiratorial power and presumed to be clever enough to get their way against high odds.

Lipstadt offers what I think is a quite reasonable analysis. But I wish I had had a chance to ask her about whether she does what I do, which is to differentiate between anti-Judaism and modern antisemitism, a subject I deal with in considerable length in this essay about the long, sorrowful history of anti-Judaism in Christian history and how that theological construct helped to make modern antisemitism possible.

There is not an unbroken, direct line from early anti-Judaism among Christians, who called Jews Christ killers, to modern antisemitism, in which Jews, starting in the 1800s, are depicted as greedy, dirty conspirators trying to control the world. In other words, modern antisemitism is racial, ethnic and economic in nature compared with anti-Judaism, which is more theological in nature.

Well, Lipstadt had much more to say about antisemitism and about bigotry of all kinds. In the end, though, she was right that we now are obligated to make sure people know that any kind of publicly expressed prejudice is unacceptable and that we must oppose it even if it means we have to assume the role of "the unwelcome guest at the dinner table" who won't put up with racist or antisemitic remarks from old Uncle John.

Silence, after all, means people are free to assume that we agree with whatever bigotry was just expressed.

SO IT'S NOT ALL ABOUT THE MONEY?

One of the most famous purveyors of the twisted "Prosperity Gospel," Benny Hinn, now says he was wrong about that approach and that he won't do that any more. I hope someone will monitor him for the next year or two to see if his repentance is authentic or just one more way to call attention to himself and his alleged ministry.