Not quite a year ago, the World Health Organization reported that hunger affects 821 million people -- one in nine -- in the world and that "Hunger has been on the rise over the past three years, returning to levels from a decade ago. This reversal in progress sends a clear warning that more must be done and urgently. . ." 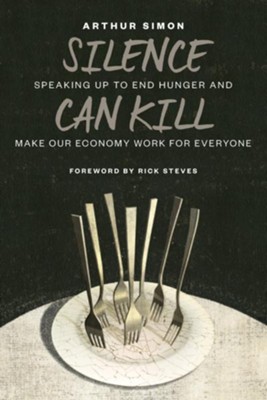 The Rev. Arthur Simon knows all this. And, in his new book, Silence Can Kill: Speaking Up to End Hunger and Make Our Economy Work for Everyone, he focuses on hunger in the U.S. and how ridiculous it is that we haven't worked up the will to solve it, given that solving it is much less expensive than letting it continue or even grow. He blames lots of people for this failure, but has special words of reproach for people of faith, especially Christians, who think that solving hunger would require them to get their hands dirty with politics.

Simon speaks from experience. He's founder (in 1974) and president emeritus of Bread for the World, which describes itself as "a collective Christian voice urging our nation’s decisions makers to end hunger at home and abroad." Simon himself in his new book calls Bread for the World a "citizens' lobby" designed in part to educate elected officials about what they should be doing to rid the country and the world of hunger.

As someone who has worked in the world of charity for decades, Simon knows, as he writes, that there's a widespread "impression that charity is the main way or even the only way citizens have of responding. People are led to think that the role of charity is far more consequential than the role of government in addressing hunger, when the opposite is the case by a wide margin. As a result, few of us who support such charities also urge our members of Congress to act so that the nation as a whole does its part in addressing hunger and poverty."

And be sure of this: Simon understands that simply giving people free food won't solve the problem. Rather, they also need jobs and respect and education and a reliable way forward. But solving hunger, he suggests, is the low-hanging fruit here, and accomplishing that can lead to solving the other problems. In fact, not solving hunger is simply wasting good money.

By not doing away with hunger around the globe, Simon writes, we are colluding with a problem that "is directly or indirectly responsible for the deaths of at least six million people each year, half of them young children." The good news is that "the world has made dramatic gains against hunger and poverty in recent decades. The share of its population that is chronically undernourished has sharply receded. The world is now within reach of putting a near end to that kind of hunger."

Yes, Simon acknowledges, in the short term it would require more public dollars to solve this problem, but fairly quickly the improvement in the health and well-being of citizens would more than pay for those dollars through lower health care costs, more people in the work force paying taxes and similar beneficial returns, including children able to focus on school instead of on their empty stomachs.

Simon, brother of the late Illinois Sen. Paul Simon, makes an excellent case for public investment to wipe out hunger in the U.S., but he doesn't stop there. He seeks to enlist people of faith to do more than hand out baskets of food on holidays. His main reason, he says, is "to convince believers that to engage in charity for hungry people, while remaining silent about it at the political level, not only limits their impact on hunger, but actually works against their faith. It is an inconsistency that results in widespread suffering and death."

This book is both disturbing and compelling. I hope faith communities of many traditions will use it as a guide for how to get more involved in solving a problem that is quite solvable. Not to do work toward a solution would be a violation of many faith communities' foundational principles.

THE GROWTH OF 'DINNER CHURCHES'

Speaking of food, Religion News Service has done this interesting article about so-called "dinner churches," which I wrote about almost two years ago in this Flatland column. The trend (and Kansas City was an early adopter), is spreading nationally.