If you have paid any attention at all to international news in the last decade or so, you have heard about the desperate plight of the Rohingya Muslims of Myanmar (formerly Burma). But perhaps the nuances and details of the story have escaped you, along with the connection to Aung San Suu Kyi, the Myanmar leader who has received many humanitarian awards, including the 1991 Nobel Peace Prize. 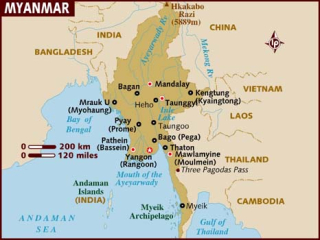 In recent times Suu Kyi, who spent many years under house arrest at the direction of a military dictatorship in her country, has been routinely and roundly criticized for her failure to defend the Rohingya, who have been concentrated in Myanmar's Rakhine state.

The story, however, is more complicated than it might at first appear. This report in the current issue of The Atlantic by Ben Rhodes, a former deputy national-security adviser to President Barack Obama, gets into some of the details about why that is so and whether the Rohingya who have sought refuge in neighboring Bangladesh have any future at all.

Is this a clear case of genocide that hasn't been stopped by someone who, almost everyone thought, was a great moral leader? Or is it something else, at least in part?

Rhodes leaves us with the impression that it's mostly the first option but that Suu Kyi has what she believes are defensible reasons for her inaction. Those reasons, of course, are simply incomprehensible to the dying and oppressed Rohingya Muslims.

"The military," Rhodes writes, "has ruled the country either directly or indirectly since 1962. In 2011, stifling martial law gave way to a partial opening: Political prisoners were released, relatively free elections were held, and the government began to plug Myanmar into the internet and the global economy. But modern Myanmar has never known peace or controlled all of its borders."

How do the Rohingya fit into all that? Rhodes' answer: "The status of the Rohingya, who live in Rakhine State — which borders Bangladesh to the north and the Bay of Bengal to the west — has long been at issue. Many Burmese deny that the Rohingya are a distinct ethnic group, referring to them as Bengalis — unauthorized immigrants from Bangladesh. This was codified into law in 1982, when legislation denied citizenship to anyone who had come to Myanmar during British rule; the junta used this law to deny citizenship to all Rohingya. In the late ’70s and again in the early ’90s, the military launched operations that brutally drove more than 300,000 Rohingya into Bangladesh."

The shock to the international community has been Suu Kyi's apparent hardness of heart toward the Rohingya, who, in the beginning of all this, Rhodes makes clear, were not entirely innocent.

But as Rhodes reports about Suu Kyi, she "has done little to stop the atrocities. Her seemingly callous indifference has felt to many outsiders like a betrayal. How can Suu Kyi, an avatar of human rights for so many years, stand by while her government violently tramples them? Western politicians and media have heaped criticism on her; many of the organizations that championed her cause are rescinding the awards they once rushed to give her. But Suu Kyi has refused to shift course."

When pressed on the Rohingya, Rhodes says, Suu Kyi say, “We will get to those things. But first must come constitutional reform. We cannot have human rights without democracy.”

In the meantime the Rohingya Muslims are stateless refugees and many have died while Suu Kyi has other things higher on her agenda.

Suu Kyi may have been an honorable voice for freedom and democracy in earlier days but today she seems a voice for soulless pragmatism at the cost of lives. And her reasons for adopting that position seem hollow.

(By the way, if you want to see some of the faces of the Rohingya, this piece offers that, plus some stories about how they're surviving, if at all.)

DON'T EXPECT AN ANSWER, EITHER

A federal appeals court has ruled that it's all right for the Pennsylvania House of Representatives to ban guest chaplains who don’t believe in God. Still, it might be sort of intriguing to hear how they'd begin a prayer: "To whom it may concern." Or "Dear Nobody." "Oh, nonexistent God."

P.S.: You might be interested in the Sept. 14 "Free the Innocent" fundraiser gala sponsored by the Miracle of Innocence project that I wrote about in a Flatland column here. To get tickets to attend, go here.