When I lived in India for two years of my boyhood, I was well aware that Hindus made up a majority of the population and that Muslims were next in order of magnitude. 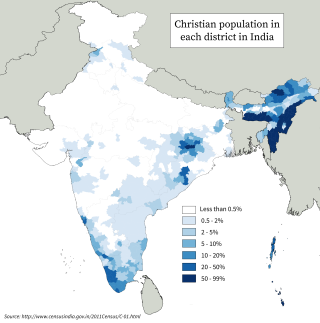 What struck me even then as a 12-year-old was the oddity that there weren't many Christians in the country despite the fact that Britain had ruled India for about 200 years, ending in August 1947. (My family arrived in 1956.) After all, I reasoned, surely most of the Brits who came to India were members of the Church of England. And surely there were both British and American missionaries (I knew some of the latter, though my parents were not there are missionaries).

Why didn't Christianity catch on more in India as it has done across Africa in recent decades and in such places as South Korea? (In recent years the percentage of Christians in the Indian population has been stuck at roughly 2.3 -- no larger and maybe even a little smaller than when we lived there. As India has been in the news a lot lately with its Hindu-Muslim dispute over Kashmir with Pakistan, this seemed like a good question.)

I think I've discovered at least part of an answer in 2005 book a friend recently asked me to read, The Ruling Caste: Imperial Lives in the Victorian Raj, by David Gilmour.

Gilmour points out that the British training for people being sent to run India did not include "Christian religious training. Civilians (the term given to members of the Indian Civil Service) were nevertheless expected to perform religious ceremonies in places without resident clergymen. . .

"Religious fervour diminished in the years following the (1857) Mutiny. After 1857 there were few Lieutenant-Governors like the Evangelical, Sir James Thomason, who himself conducted 'divine service' in his camp when on tour. Organized Christianity no longer played much part in the lives of (British) men who spent half the year touring their districts without seeing a church or a priest.

"Alfred Lyall complained that the Service contained some 'dour Low Churchmen with a strong Scotch flavour', and the Evangelical tradition reappeared in the figure of Frank Lugard Brayne, a zealous Commissioner in the Punjab, but religious enthusiasm was rare among late Victorian Civilians. One admitted that he and his colleagues cared 'little about dogma and doctrines' and would have agreed with Kipling's fictional Assistant Collector who thought 'one creed as good as another'. They certainly did not think that India could be converted to Christianity or even that conversion was a desirable goal."

Beyond that, Gilmour writes, many British civil servants in India "regarded missionaries as 'pestilential mischief-makers' whom they would have liked to expel from the land."

So when we lived on the campus of what then was known as the Allahabad Agricultural Institute (now the Sam Higginbottom University of Agriculture, Technology and Science), where my father was stationed as part of a University of Illinois ag team, a small group of Christians, including my family, would gather for Sunday evening services. And my mother started a Sunday school for Christian youth that met in our home.

But as Christians we were well aware that Christianity was a distinctly minority religion in the land. And now we both have a little better understanding of why.

(The map you see here today, showing Christian populations in India in the 2011 census, came from here.)

The 10th Religions for Peace World Assembly has been meeting in Germany this week, with nearly all participants saying they must ignore religious differences and work together on problems or nothing will be accomplished. True, but how can that message penetrate the brains of all the religious people around the world who are certain they're right and everyone else is dead wrong?