Home Archives Profile
What it takes to keep teens connected to faith: 8-21-19
Why India's Christian population is so small: 8-23-19

Ever since the results of the 2016 presidential election became known, all kinds of analysts have tried to explain why 81 percent of white Christian evangelicals abandoned their moral center and voted for a man whose life has been an almost complete rejection of the values for which those voters have long stood. 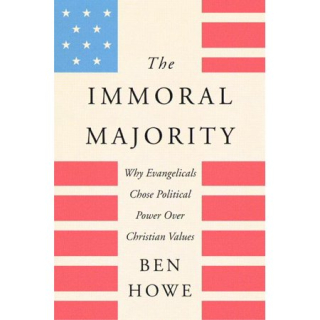 In a new book, one white evangelical, Ben Howe, turns state's evidence and testifies about what made so many of his fellow evangelicals (though not him) support Donald Trump. It's an important insider's view that seeks to explain (not condone) what has seemed so inexplicable to many of us who are outside the white evangelical boundaries.

In The Immoral Majority: Why Evangelicals Chose Political Power over Christian Values, Howe concludes this: "For the possibility of a bit of worldly influence, they surrendered their moral voice in the public sphere."

It is a sad, even appalling story. And not just because it resulted in the election of a man unfit for the office. Beyond that, it's sad because of the enormous damage it has done to evangelical Christianity, to Christianity more broadly and to religion itself even more broadly. If people of faith loudly profess to be (fill in the blank) but then act in a radically different way, why would anyone want to be connected to faith at all? Hypocrisy kills religion. And it's hypocrisy that Trump's white evangelical supporters have displayed in bright colors.

Howe, a filmmaker, podcaster and writer, is aiming his criticism directly at evangelical Christians and calling them to make more moral choices. So in one sense this is an inside-evangelical-Christianity book with the rest of us looking on. But it's one that any American citizen should find intriguing because it helps to explain the shocking choice most white evangelical voters made in 2016.

Howe saw a few signs early in the 2016 race that trouble was ahead as Trump kept winning primary elections, but, like many people, including many Republicans, he never imagined that Trump could get the nomination or, if Trump did, that he could beat Hillary Clinton, for whom Howe did not vote, either, objecting to many of her political positions.

What finally got Howe's complete attention in 2016 was a tweet sent out by the Rev. Jerry Falwell Jr. It said Falwell was honored to introduce Trump "at a religious leader summit in NYC today!" With the tweet came a photo that included a shot of a Trump wall on which was displayed the many magazines on which Trump's photo has appeared on the cover. One of them showed a 1990 edition of Playboy "with playmate Brandi Brandt wearing nothing but Trump's tuxedo jacket."

It stunned Howe, though not because he's a prude, he writes. Rather, the photo triggered a childhood memory of being "taken to a protest by my evangelical parents." (His father spent part of his career as a Southern Baptist preacher.) There, about 5,000 demonstrators were objecting to the sale of Playboy in 7-Eleven convenience stores, and the protest was led by Falwell's father, the Rev Jerry Falwell Sr., creator of the political-religious organization called the Moral Majority.

For a time, Howe's family attended Falwell's church in Lynchburg, Va., site of Liberty University, where Falwell was president. Now Falwell's son, as president of Liberty, was promoting a man featured on the cover of the very magazine Falwell's father railed against, a presidential candidate Howe describes as "a confessed and apparently unrepentant serial adulterer."

Howe, by the way, uses part of this book to confess the sins of his own youth, in which, he writes, he "succumbed to peer pressure and dived deep into the world of drugs and crime." Eventually he found his way back to health, balance and the church. But he also writes about Christian leaders -- such as Jimmy Swaggart, Jim Bakker and Robert Tilton -- who in the 1980s were bringing disrepute on American Christianity through sins and bad choices of their own. The stigma of such charlatans "chased evangelicals for decades," Howe writes, even though many of the errant preachers weren't evangelical but, rather, Pentecostal. Still, he suggests evangelicals should have learned from the experience of scandal, but seem not to have.

Instead, they were attracted to a candidate about whom Howe writes this: "When it comes to Christianity, Trump knows the notes but not the tune." Still, Trump was politically savvy enough to hold a private meeting in June 2016 "with a thousand value-centric conservative leaders," Howe writes. It was that meeting that Trump offered himself "as God's preference, not just man's." That's when the attitude of evangelicals started to shift toward the inevitability of Trump's nomination and to look for reasons to justify their support of him, Howe says. The dam broke and evangelicals were mostly all in for Trump after that.

"It may be a noble mission," Howe writes, "to seek to influence the elected through the mobilization of Christian voters who demand the character and values that reflect Christ's teachings. But that is very clearly no longer the mission."

Instead, he says, Trump evangelicals have overtly altered "their entire ethical framework to accommodate one Republican president."

Well, there's much more in this book, including a discussion of "vessel theology," which imagines that God sometimes chooses someone who seems unlikely to be God's tool of change -- as God is said to have chosen King Cyrus, a non-Jew, to help the people of Israel as recounted in the Hebrew Bible. And, Howe writes, "this view of Trump as God's inerrant vessel permeates the modern evangelical movement. . ." Remember that this is the movement that loudly called for the resignation of President Bill Clinton after the Monica Lewinsky affair because it was such a moral scandal, which, of course, it was.

But, as the author notes, long before Trump, "the ingredients required for his ascent had been brought together. It was a toxic mixture of resentment and desire for revenge which spawned the Trump evangelical moment. Evangelicals were tired of being on the outside."

By backing the winning candidate in 2016, Howe writes, evangelical leaders "have taught their flocks to value the things of the world, rather than the things of Christ."

What does all this mean for the future of the evangelical branch of the Christian church in the U.S.? Howe's answer: ".  . .how can anyone expect anything other than the loss of younger generations, the departure of members and a difficulty attracting new adherents to the faith?"

In biblical terms, evangelicals have sold their birthright for a pot of stew. It's one of the most important religion stories of our era, and it will have ripple effects for decades.

AND WHAT ABOUT TRUMP AND JEWISH PEOPLE?

Sticking today with the president as a topic, the other day he declared that Jews who vote for Democrats show "great disloyalty." The list of what's problematic about his statement is long, and the Jewish newspaper The Forward covers some of that list in the piece to which I linked just you. I'm not sure I'd classify Trump as a standard antisemite, but he certainly says and does things that raise that question, despite his actions favoring Israel. It's complicated. But Trump seems consistent on his "disloyalty" belief about American Jews. He said the same thing two days in a row, this New York Times story reports.