All of us know that sometimes religions produce people so convinced they are right about matters of theology that they become not just haters but terrorists. 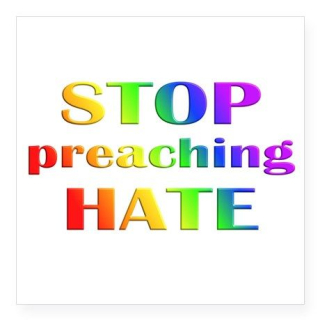 I find it so damn frustrating that they don't understand the value of doubt and the need to recognize that their finite minds can never fully comprehend the infinite.

But they keep appearing in faith tradition after faith tradition. One of the most recent stories about these rigid haters, published by Slate, describes the rise of "a small but growing network of ultra-fundamentalist Christian churches headed by young pastors whose noxious rhetoric has gone viral multiple times in the past few years."

The vile nature of what these pastors are preaching is almost enough to make you give up on the sanity of the human race. Examples from the Slate story: "Grayson Fitts, a Tennessee pastor who also worked as a county sheriff’s detective, made national headlines in June for preaching that LGBTQ people should be executed. Also in June — Pride month — a Florida pastor hosted a “Make America Straight Again” conference with the goal of putting 'homosexuals back in the closet.' Jonathan Shelley in Texas suggested from the pulpit in January that rebellious students and 'lazy gamers' should be stoned. Another Texas pastor, Donnie Romero, said 'the Earth is a better place now' after the 2016 Pulse nightclub shooting in Orlando, Florida.

"All these men are or have been pastors in the New Independent Fundamental Baptist movement, a loose cohort organized by Steven Anderson, an Arizona pastor who has been called 'the heir apparent to late Westboro Baptist Church leader Fred Phelps.'”

As people in the Kansas City area know well, Phelps and his theological goons, most of them members of his immediate family, would travel this area -- and the country -- spewing their homophobic hatred (several times at me personally).

The core question is what moves people toward such ridiculous certitude? Why do they imagine that religions that have preached love and compassion and mercy and justice have been so wrong and now need to offer hatred and condemnation? I'm still not sure anyone has figured out how people go off the rails in that way.

(By the way, when the Slate story quotes someone from Central Baptist Theological Seminary, it's the one in the Twin Cities area, not the American Baptist seminary in Shawnee, Kan., by that same name. Although the Twin Cities seminary would describe itself as more theologically conservative that the Shawnee school, it is not a Southern Baptist Convention seminary. My August Flatland column, to post here on Aug. 25, will describe how the seminary in Shawnee was rescued from death in recent years.)

The author of this opinion piece, a religious studies teacher at a university, says it's not quite accurate to speak of a "rise" of progressive religious thinkers in recent times. They've been around a long time, she says. "Still," she writes, "Trump’s hardline immigration policies seem to have spurred a broader population of Christians into action. And their civil disobedience crosses racial, ethnic and even party lines in new ways."