In this version of Job, he recants nothing

The biblical book of Job radically challenged conventional wisdom of its time (roughly the 6th Century BCE). That alleged wisdom suggested the suffering was a sign that the sufferer had sinned and was therefore being punished. 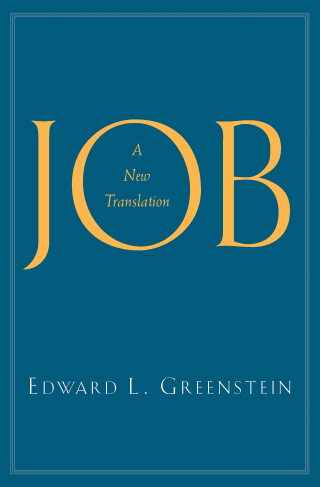 What the anonymous author of the mythic Job story says, by contrast, is that sometimes suffering just happens, even to people who, even God agrees, are righteous.

But across translation after translation, including Robert Alter's new three-volume Hebrew Bible, near the end of the book Job is said to have repented "in dust and ashes" and to have recanted his long, long case against the deity.

Until now, that is.

In Job: A New Translation, by Edward L. Greenstein, an emeritus professor of Bible at Bar Ilan University in Israel, Job recants nothing at the end. Indeed, Job tells God that now that he's seen and heard God he's "fed up" and that he "takes pity on" what Greenstein, in a footnote, calls "wretched humanity."

In effect, Job accuses God of unfairness resulting in human pain. And he's not sorry he's said that, either.

Greenstein insists that this is the correct translation of Job's words. As Greenstein writes in notes preceding Job's response to God in chapter 42, "Job understands the deity to be exactly as he had feared: a purveyor of power who cares little for people. Parodying the divine discourse through mimicry, Job expresses disdain toward the deity and pity toward humankind (and not acquiescence, as has been generally thought. . .)"

How could translators come up with such different conclusions about what the author of Job wrote?

Greenstein explains that scholars working with the manuscripts of Job are faced with "its eccentric idiom and often inscrutable text. . .(that) poses an extraordinary challenge." Despite that, he writes, "I have attempted to find an explanation of every word, phrase and syntactic construction. With all due modesty, I believe this is more than most other translators can claim. Such work requires tremendous patience and effort." (Speaking of patience, by the way, Job is famous for his patience, but for no good reason. He had almost no patience at all for what God seems to have put him through in this mythical story. And that impatience shows through even more clearly in Greenstein's translation.)

Greenstein himself shows little patience with other translators: "There is no delicate way to put it," he writes. "(M)uch of what has passed as translation of Job is facile and fudged. Translators have for the most part recycled interpretations that had been adopted earlier, dispensing with the painstaking work of original philological investigation that might lead to new and proper understandings."

In chapter 42, for instance, he notes that a typical modern translation of Job's words read this way: "Therefore I despise myself, and repent in dust and ashes."

But he writes, "the first part of this translation is a stretch, and the second part turns out, after advanced investigation, to be highly improbable."

And yet even Robert Alter, in his magnificent new translation of the entire Hebrew Bible, comes up with something like that traditional translation of Job's words: "Therefore do I recant,/And I repent in dust and ashes."

And in a footnote for chapter 42, Alter speaks of "Job's final recantation" and, in another footnote, of Job's willingness to "concede the justice of God's position."

Perhaps it would be fun to have Greenstein and Alter duke this out at some kind of symposium. I'd show up for that.

There are, of course, now dozens of translations of the book of Job, many of them by the translation teams that put together such versions of the Bible as the New Revised Standard Version, the New International Version, the Common English Bible and others. And, in almost a separate category, is Stephen Mitchell's engaging 1979 poetic translation of parts of Job. Mitchell, by the way, adopts something like the traditional translation for Job's final words: "I had heard of you with my ears;/but now my eyes have seen you./Therefore I will be quiet,/comforted that I am dust."

So careful readers who want to explore the mined depths of this Hebrew work will have to make choices. Greenstein's version should be among those considered for many reasons, not the least of which is its iconoclastic (and maybe correct) approach to the improbable idea that Job fell out of character at the end of the book and turned to quivering mush before God. As for me, I find Greenstein's Job more appealing than the traditional Job.

P.S.: DENVER -- I'm here in the Mile High City for a few days to celebrate some events with friends. While I'm gone I won't be adding the usual second item to the daily blog post.