Home Archives Profile Subscribe
A sad, paradoxical picture of religion in China: 8-13-19
A documentary series on religion and politics: 8-15-19

Can Hindus and Muslims in the subcontinent unite? 8-14-19

My childhood friend from India, Markandey Katju, former justice on India's Supreme Court, will not be celebrating today as Pakistan marks the 72nd anniversary of its independence from Britain and its creation as a separate country. 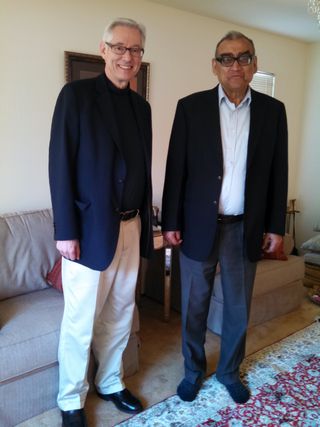 Katju (pictured here with me in California a few years ago) is convinced it was a huge mistake to create separate countries at the time -- Pakistan designated for Muslims and India for Hindus. At midnight between Aug. 14 and 15 on that date, the independence and separation went into effect. Today Pakistan celebrates on Aug. 14 while India considers Aug. 15 independence day. 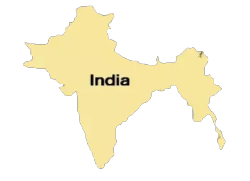 At least partly because he believes that Muslims and Hindus should be able to live together peacefully in the same country (and why not?), he has launched an effort to reunify Pakistan, India and Bangladesh (the latter, in 1947, became East Pakistan, but later became a separate country). The Indian Reunification Association, which Katju launched to further his efforts, has lots of resources on its website to explain why this is a good idea -- as I believe it to be. The goal is to create one united nation under a secular government, though Katju and his associates understand this will take a long time to accomplish.

On the IRA website, Katju has published a series of addresses to the people of the subcontinent explaining his vision. In this one, he writes this: "The reunified India will strongly support science and scientific thinking. While supporting religious freedom, it will suppress religious extremism or bigotry, whether Hindu, Muslim or Sikh, and crush it with an iron hand. It will not tolerate discrimination against minorities, dalits or women." (Dalits are members of the lowest caste in India's traditional caste system.)

No doubt religious extremism is a serious problem in the world, including in India, but a secular government, which Katju proposes, will need wise and discerning leaders to know what really is extremism and what is merely innocent beliefs and actions that harm no one. That's not the only problem to be faced in a reunited subcontinent, but it surely will rise toward the top of the list if it is handled badly.

Katju is an avowed atheist and a very smart man who is deeply confident in his opinions. He and I met when we were boys attending the same school in what then was called Allahabad, India, now Prayagraj. I was in India for two years in the 1950s as my father worked with a University of Illinois agriculture team in the time of the Green Revolution. It's been both fun and enlightening to argue with (and learn from) Katju over these decades about matters of faith and to continue to maintain our friendship. In some ways he and I are proof that the religious harmony he envisions in a reunited India is possible.

(By the way, in the latest edition of his regular Bloomberg column, my friend Raj Bhala, who teaches law at the University of Kansas, focuses on India and the current struggle with Pakistan over Kashmir. It's well worth a read.)

(The image on the right above shows what India would look like if Katju's dream of reunification is achieved.)

THE UNCERTAIN FAITH OF ABE LINCOLN

A Bible once owned by Abraham Lincoln was rediscovered recently, and it has led to this really interesting opinion article from Religion News Service. The author describes the former president near the end of his life as "Lincoln, raw and hurting yet turned to God." And adds this: "We are helped to remember that the costly journey of faith grants its own rewards, even when left unfinished." And, of course, in some ways it's always left unfinished.