Home Archives Profile Subscribe
What children must learn about death: 7-5-19
Why people of faith should be political court jesters: 7-8-19

What Frederick Douglass can teach us about reparations: 7-6/7-19 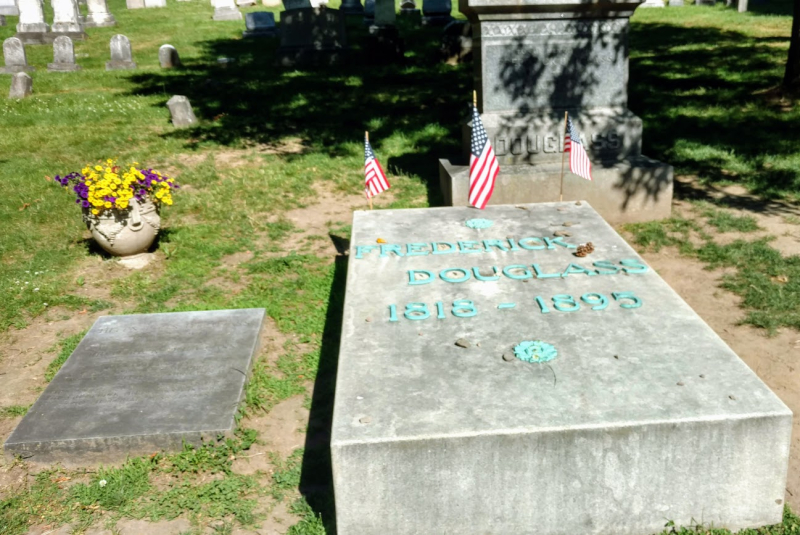 ROCHESTER, N.Y. -- Mount Hope Cemetery here, founded in 1838, is huge -- some 200 acres through which 14 miles of roads run. So my only hope of finding the grave of the great abolitionist Frederick Douglass was to stop at the office and ask for directions. 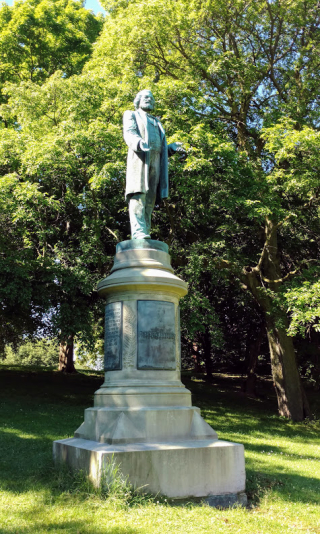 And that's not a bad metaphor for why we all need to ask for directions from Douglass and many other previous (and current) civil- and human-rights leaders if we ever hope to come to some kind of social consensus on the newly hot issue of reparations. It's a term that in some minds means simply financial payments to the descendants of American slaves. But it's much more complicated than that -- and should be.

As this Vox article notes, "When 2020 presidential candidates first began discussing reparations in February and March, it marked a turn in a primary contest in which black voters and their continued concerns about the economy are expected to play a significant role. That the attention to reparations has remained so prominent in the months since speaks to a series of changes that have occurred in recent years — namely, the increased academic understanding of and public attention to the ways the history of slavery and discrimination have fueled disparities like the racial wealth gap, which shows that the median white household is 10 times wealthier than the median black one.

"These changes, coupled with a wave of grassroots activism around racial inequality and economic injustice, have helped produce a shift in mainstream attention to reparations."

But, again, using the term "reparations" must be done with great caution and clarity.

Might reparations involve financial payments, similar to the ones given to Japanese-Americans who were unjustly incarcerated in internment camps in World War II, including one of my brothers-in-law? It might. But what is also profoundly in play here is a necessary acknowledgment that the U.S. was founded on white supremacist values, that those values were challenged in the Civil War but that they prevailed in the South in the badly botched Reconstruction era. And elements of those values, of course, also could be (and can still be) found in the North in non-slave states both before and after the Civil War and before and after the Jim Crow era.

(For a deeper look at the abysmal period of Reconstruction, please read the book Grant, by Ron Chernow.)

Monetary reparations for racial injustice might help and be welcomed in some circles but such payments without a confession of our racist roots and a societal determination to create what Martin Luther King Jr. called the "Beloved Community" would be morally inadequate.

This is where learning from Douglass and others can be helpful. Douglass, of course, was a Republican when that party was the party of Lincoln and emancipation and when the Democratic Party of that era was the party of white racism and other kinds of crushing bigotry.

And Douglass, while working tirelessly before and during the Civil War for slavery's abolition, also had a streak in him that insisted on freed slaves being self-reliant and strong in the face of a society that oppressed blacks. It's an interesting mix and worth exploring, which is what David W. Blight does in his new biography called Frederick Douglass: Prophet of Freedom.

Blight writes of the autobiographies written by Douglass and other prominent blacks in the 19th Century, noting that "In various ways, they all contributed, wittingly or not, to the Horatio Alger mythology of their time. They were and had to be success stories wrested from the depths of obscurity and repression. . .This age of Progress required a writer with Douglass' story to be a kind of missionary for success, and therefore to distance himself from his roots and from the Southern black folk around whom he found a beginning. In this sense, Douglass built his own monument."

None of this is to say that Douglass and civil rights leaders of later times imagined that individuals, on their own, could completely overcome the systemic racism that often has provided the atmosphere of American political and social life. But it is to say that any discussion of reparations, apologies and other official responses to our history should offer as complete a picture as possible of how a crushed people responded to reality, including the few Frederick Douglasses who somehow managed to rise to great heights, often in spite of the societal objects put in their way.

As I look back on the time (1967-'70) that I worked in Rochester for the now-defunct afternoon newspaper here, I am saddened that I didn't pay more attention to Douglass' rich life and the role he played in Rochester's history.

Which leads me to believe that if we don't understand the base thinking that led to slavery -- including ways in which the Bible was misused to justify it -- and to the shocking collapse of Reconstruction and to Jim Crowism and to the various forms of bigotry still around today, any movement toward reparations will seem hollow.

But if we use this opportunity to relearn our own history -- the sordid and the glorious -- perhaps we can insure that we won't sacrifice the future of fellow citizens on the altar of demented bigotry.

(By the way, if you want to read an article about reparations by one of the smartest and wisest African-American writers in the country, Ta-Nahisi Coates, click here. It was published in The Atlantic in 2014 but still is worth a read five years later. As he notes in the piece, "Reparations — by which I mean the full acceptance of our collective biography and its consequences — is the price we must pay to see ourselves squarely. . .What is needed is an airing of family secrets, a settling with old ghosts. What is needed is a healing of the American psyche and the banishment of white guilt. What I’m talking about is more than recompense for past injustices — more than a handout, a payoff, hush money, or a reluctant bribe. What I’m talking about is a national reckoning that would lead to spiritual renewal." Oh, and I enjoyed hearing Coates speak in Kansas City a few weeks back.)

(The statue of Douglass pictured at left is located in Rochester's Highland Park, not far from Mount Hope Cemetery.)

THE TROUBLING CONSEQUENCES OF THE 'NONES'

Scholars of religion have spent several decades studying the rise of the "nones," or the religiously unaffiliated in the U.S. But as this RNS piece suggests, "those who are 'nothing in particular' aren’t just cut off from organized religion. They have disconnected from many of the foundational structures that hold us together as communities." And that spells trouble coming: "If the trend continues, the United States may be headed for a very disjointed, disaffected and lonely future." Sigh.