Home Archives Profile
Would it matter if we're not alone in the universe? 7-24-19
Texas leads the wrong way on capital punishment: 7-26-19

Even those of us who are active in interfaith work in the Kansas City area sometimes lose track of how much goes on in this important field. 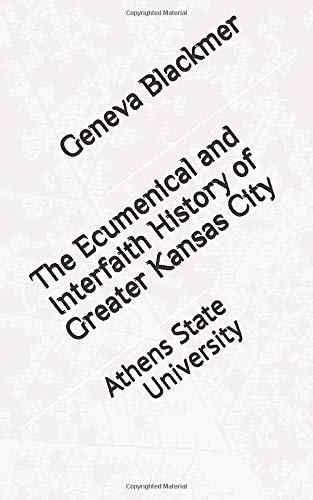 A new booklet by Geneva Blackmer should help everyone keep track of that and, I hope, become more engaged in this work.

It's called The Ecumenical and Interfaith History of Greater Kansas City. And it's available for very little money from Amazon at this link.

As Blackmer, a 2016-'17 intern for the Center for Religious Experience and Study who recently accepted a position as program director for the Interfaith Center at Miami University in Oxford, Ohio, notes, "If it was ever necessary to designate one city in the United States as the heart of interfaith activity, a very compelling argument could be made for Kansas City."

The booklet is itself an argument for that contention.

It begins with ecumenical and interfaith activity starting in 1925 and lists several dozen organizations and initiatives that have been part of this work since then.

In interfaith work, among the earliest efforts was the creation in 1953 of the Kansas City chapter of the National Conference of Christians and Jews. Between then and the early 1980s, lots of relatively small but important ecumenical and interfaith initiatives were active here.

Then, in 1982, the Rev. Vern Barnet founded the Center for Religious Experience and Study, now usually just called CRES, and it continues under his leadership. Barnet also was instrumental in creating the Greater Kansas City Interfaith Council in 1989 as a CRES program. That council today has representatives from some 20 different faith traditions.

Well, lots else is listed in Blackmer's book, including a few efforts I've been privileged to be part of, such as the Kansas City Interfaith Youth Alliance, which now works closely with the Faith Always Wins Foundation, created by Mindy Corporon and others after a neo-Nazi murdered three people at Jewish institutions in 2014, including Corporon's father and son.

There is, of course, still much to be done to reach the Interfaith Council's goal of making KC the most religiously welcoming community in the country. But Blackmer's work is a tribute to how much effort already has gone into achieving that goal.

Get a copy of the book and find where you might plug in.

(And speaking of religious literacy, here's a story from the Pew Research Center about what Americans know and don't know about religion. How do you stack up?)

Speaking of matters of religion in the Missouri-Kansas area, there's a new film out about Westboro Baptist Church of Topeka, the virulently anti-gay congregation founded by the late Fred Phelps. But the writer of this review of the film doesn't like it much. Well, given that Phelps and his theological thugs have picketed me personally five times, I don't much like the Westboro Baptist Church, so there's that.