Home Archives Profile Subscribe
Maybe the internet is our religion: 7-20/21-19
What role should religion play after a suicide? 7-23-19

How did Christianity and oil make America? 7-22-19

As regular readers of this blog know, I frequently review -- or at least mention -- new books that in some way touch on religion or spirituality. 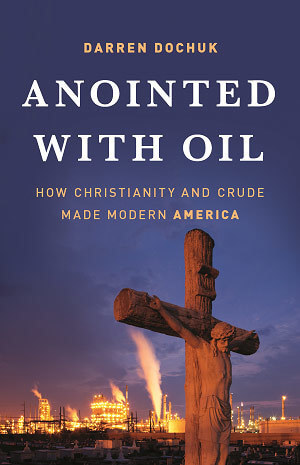 It is impossible, of course, for anyone to keep up with the hundredyskillion such books produced each week, so I must pick and choose, to use a cliche employing two words that mean approximately the same thing. (Who thought that one up?)

But sometimes I run across a book that I haven't had a chance to read but that looks like one that might interest some of you. Which is why, today, I'm writing about a new book by a man who teaches history at the University of Notre Dame, a book I have simply read about, not actually read.

It's called Anointed with Oil: How Christianity and Crude Made Modern America, by Darren Dochuk. And it looks intriguing.

Here's a bit about the book from this Notre Dame press release:

Dochuk "chronicles North America’s age of oil — in particular, crude’s inseparable relationship to Christianity. He finds that since the Civil War-era discovery of oil, Americans have consistently claimed black gold as a spiritual blessing, a sacred burden and an emblem of national identity and mission in the world."

Would you have intuitively put those two together, oil and Christianity? I'm pretty certain I wouldn't have thought to do so. Which is why the book interests me.

Dochuk, the press release says, "introduces two main characters and their attendant belief systems. The first is major oil’s civil religion of crude, most clearly manifested in the sprawling and centralized business, faith and philanthropy of the Rockefeller family. The second is independent oil’s populist, boom-bust style of 'wildcat Christianity,' represented by oil families like the Pews and Hunts and rooted in the Southwest."

The editorial reviews at the Amazon page to which I've linked you above on the book's title are full of praise, which is sort of what you expect on Amazon pages, of course, but they're still interesting.

Christianity has been the dominant religion in this land since well before the U.S. became an official nation. So it make some sense for historians and theologians to look at the various ways the faith has shaped the nation and ways the American culture has, in turn, influenced Christianity in all its forms here. Christianity's dominance in the U.S. has been slipping for many years, but a majority of American citizens still identify as some kind of Christian.

So the intersection of faith and American politics and culture will continue to be a rich field for scholars for a long time.

Whoever among you reads this book first, please send me a report. And if you find things to criticize about it, fine. Just don't be crude.

What's being described as the oldest Christian letter outside the Bible has been uncovered in Switzerland, dating to the 230s. No, as far as we know it hasn't been in process through the U.S. Postal Service all that time.