Home Archives Profile Subscribe
What should happen if religious and civic law clash? 7-19-19
How did Christianity and oil make America? 7-22-19

In recent weeks here on the blog I've considered the changing face of religion in the U.S. and around the world, focusing on alternative spiritual paths, the rise of the "nones," or religiously unaffiliated, and the sinking popularity of clergy. 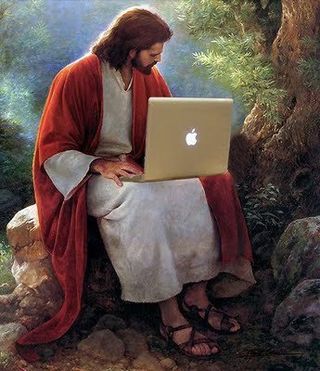 This weekend I return to that general topic to share with you this BBC opinion piece, which suggests that the most popular new religion among people around the world is the internet. I think Amol Rajan, BBC media editor, is onto something.

"While secular thinking thrives in science and the academies," he writes, "it certainly hasn't replaced faith in human affairs. But religiosity does have a new, powerful rival; one, moreover, that performs very similar functions, and makes irresistible claims on our attention. It's called the internet."

Why does he see the internet as embodying what religion itself embodies? His answer:

"Put yourself into the great intellectual flourishing of 8th Century Baghdad or of Medici Florence. In such places, religion was the air you breathe, the water you drink, the underlying code to all social interaction. The internet does the same for us today: cyberspace is everywhere and nowhere, the background noise made tangible by smartphones, those wizard-like gadgets in our hands.

"The transcendental realm to which the Medicis referred citizens was painted on the ceilings of their beautiful churches, and written into the walls of their palaces. And what is YouTube, that digital Narnia, if not a transcendentally different realm?"

Well, all analogies eventually break down, and internet-as-a-religion can take you only so far. Still, in Matthew 6:21, Jesus is reported saying this: "Where your treasure is, there your heart will be also."

And a pretty good definition of religion is "where your heart is," which is to say that to which you are devoted.

In that case, the internet certainly gains devotees and could be thought of as a religion. For, Rajan writes, "just as religion found its expression through hierarchical institutions atop of which sat a priesthood, so undoubtedly has the cult of Silicon Valley in particular given us quasi-leaders. What was (Steve) Jobs, that Zen Buddhist, if not a spiritual guide to Apple's employees, inspiring almost unconditional devotion? What is Mark Zuckerberg, if not a Utopian leading a mass movement, who wants all humanity to be part of his scheme? The priesthood had their holy texts. Today's tech evangelists find the meaning of life in code."

But maybe you disagree. Maybe we should create a meet-up group on social media to talk about this. Be sure to bring an offering for when the collection plate is passed. Apple Pay or Bitcoin probably accepted.

(The image here today can be found all over the internet, including here.)

NOW WHAT FOR INTERNATIONAL RELIGIOUS LIBERTY?

As a follow-up to this blog post from this past Monday, here's the RNS report on this past week's Ministerial to Advance Religious Freedom held in Washington, D.C. On the whole, it looks like a good beginning, though of course words are cheap and so far mostly what we have are words. We'll see whether countries guilty of repressing religious liberty will begin to bend.