Home Archives Profile
On protecting religious freedom for all, everywhere: 7-15-19
What can be learned from Muslims in the U.K.? 7-17-19 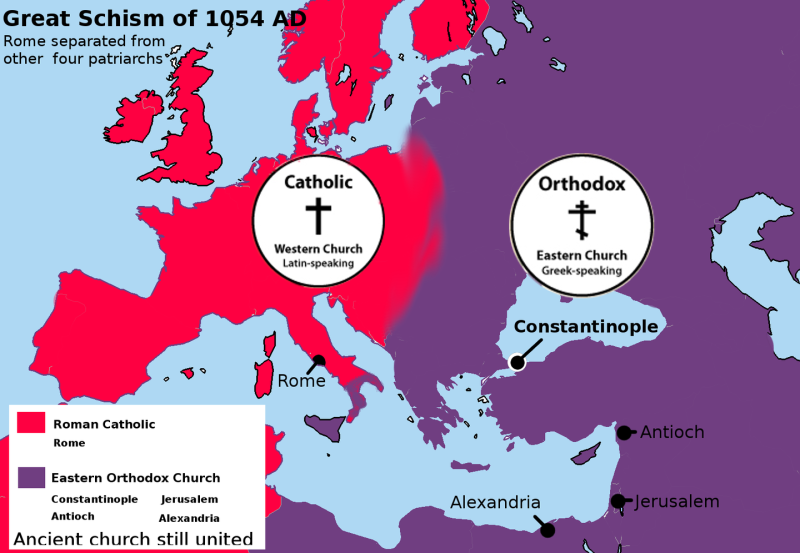 It was on this date 965 years ago, in 1054, that the "Great Schism" occurred, splitting Roman Catholicism from Eastern Orthodoxy.

I mention this to make a point about how slowly things sometimes change in institutional religion. As you might imagine, this East-West divorce did not happen overnight. The differences built up over centuries until on this date the Roman and Greek churches excommunicated each other. Michael Cerularius, patriarch of Constantinople, repudiated the claims of Pope Leo IX as the global head of Christianity.

It took until Dec. 7, 1965, for the pope (Paul VI) and the Eastern Orthodox patriarch (Athenagoras I) to meet and declare an end to the schism and express some hope of eventually reuniting the church. More than half a century later that reunification has yet to take place, but at least the two sides aren't at war.

Why does change happen so slowly in religious traditions?

Oh, there are many reasons, including the reality that it's often just easier to keep things rolling along as they have been going. Add to that the difficulty of compromise among people who often are convinced that they hold the only true version of truth and it's no big surprise that change is slow.

For example, the denomination of which my congregation is a part, the Presbyterian Church (USA), began serious consideration of whether to ordain otherwise-qualified LGBTQ folks in 1978. We found ourselves fighting about this every time our national governing body, the General Assembly, gathered. It took until 2011 for us finally to change our rules to allow such ordinations as pastors and officers and to allow pastors to officiate at same-sex weddings if they wanted to (they aren't forced to).

But what's three-plus decades among friends? Well, some of those friends have left the denomination because they are convinced the PCUSA got it wrong. Some day they may realize that the Bible should not be used as a weapon in this matter, but for now our split remains.

The United Methodists are in the midst of a similar battle now. I last wrote about that here.

In many ways, slow change probably is a good thing in religion. It prevents such institutions from flipping and flapping in the social winds. But as anyone who has tried to institute change in a faith tradition can testify, it can be really frustrating.

And don't talk to me about the patience of Job. If there's one thing Job was not, it was patient.

Both in the U.S. and in other countries some Muslim women are being harassed because of the more modest swimwear they use. Of all the things to fight about, this one seems among the silliest. Just let them follow their religious tradition. Why should anyone else care that they aren't wearing more revealing clothing?