One of the most appalling outbreaks of violence rooted in white supremacy in modern history was the 2015 murder of nine black people praying at the end of a Bible study at Mother Emanuel African Methodist Episcopal Church in Charleston, S.C. 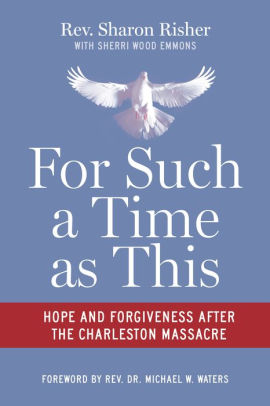 The unrepentant 21-year-old killer was found guilty and sentenced to death. Which, of course, comes nowhere close to ending the story. In any such disaster, the story continues in the lives of survivors and of families who members were killed. It's one of those continuing stories that we get in an important new book, For Such a Time as This: Hope and Forgiveness after the Charleston Massacre, by the Rev. Sharon Risher with Sherri Wood Emmons.

Risher's mother, Ethel Lee Lance, and two cousins, Susie Jackson, 87, and Tywanza Sanders, 26, were among those murdered. The path from the shock of the killing to an eventual commitment to work for sensible gun legislation and against white racist ideology has been mined with one trauma after another for Risher, and she spares the readers none of it. This is a book full of raw emotion and pleas for racial harmony and political activism to counteract the spiteful ideology that motivated the shooter.

The story is at time repetitive and could have used some additional careful editing, but in some ways those shortcomings accurately reflect the storm that Risher survived to write about. It's also a monument in words to honor those whose lives were taken away merely because Dylann Roof decided that his job was to kill as many African-Americans as possible to save white culture.

As we read about how Risher and her family worked their way through catastrophe, she acknowledges that it hasn't been easy and that there have been many internal family disagreements.

"I really do hate to put all of our business out there like this," she writes. ". . .But I want people to know, to really understand, that just because you have gone through all of this mess, it doesn't mean you can't come out on the other side. You can."

As a young woman, Risher always felt the love and support of her mother, who died a few months before her 71st birthday. But it took Risher time to find her own path. Eventually she graduated from Austin Presbyterian Theological Seminary, though she was ordained by another Protestant denomination and became a hospital chaplain, a job she was doing in Texas when the Charleston massacre occurred.

In the time since the shooting, Risher has left chaplaincy work and has been working with Everytown for Gun Safety and other groups that seek to bring some sanity to gun ownership laws in the U.S. She now describes herself as "a politician in the army of God. My weaponry is love. . ."

It took her a long time, but eventually she came to publicly say she has forgiven Roof, even if he hasn't been interested in anyone's forgiveness.

These massacres have been happening with such rapidity in recent years in the U.S. that it's easy to forget about them as the endless news cycle moves on to the next one. This book is a good reminder that real people with real problems and real solutions are involved in all of them.

It's worth our time to slow down enough to hear their testimony. And maybe if we pay attention we can end up with fewer victims and fewer mourners.

Why are several European countries so concerned with what Muslim women wear? It's a good question. This Economist piece tries to unravel the mystery. In the end, passing laws about what such people can wear is simple bigotry.