Just over a week ago, I took an overnight road trip to Pekin, Ill., to attend the funeral of the oldest of my five first cousins. As is my habit while driving alone, I sometimes flip on the radio and just scan around to see what's there. 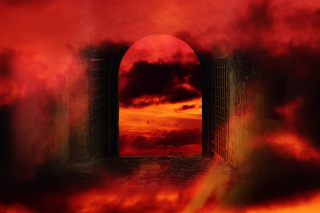 The show is part of Pacific Garden Mission, a ministry based in Chicago, where it runs a rescue mission.

I've looked through the list of available radio shows online to see if I could locate the one I listened to, but I can't find it. Must not yet be posted.

At any rate, toward the end, a man describes to a woman how a man just died in the hospital and even though the deceased apparently had never been to church and had no use for religion, somehow, two days before his death, he "got saved." And, oh, boy, was the man telling the story relieved.

You know why, right? He was relieved because now he had confidence that the man who died would not spend eternity in a flaming hell. That's what "salvation" meant to the relieved man, and it's what it means to many Christians, especially those who would describe themselves as fundamentalist, conservative or evangelical.

In this theology, hell becomes a tool of fear. The church has the answer for how you avoid eternal damnation, but if you don't buy into the church's theology you are in danger of spending the afterlife being punished forever.

The idea of hell is old. And it fits well with certain theories of atonement, especially one called the penal substitution atonement theory. In simplistic bumper-sticker language, this theory suggests that God loves us because Christ died for us. Which makes Christ's death a way of appeasing an angry God. But that gets things backwards. What Christian theology really teaches us is that Christ died for us because God loves us.

And when you put it in those terms, you have a terribly difficult time imagining anything like the kind of fiery hell that many preachers love to use to threaten congregants.

I'm reading an advance review copy of a book called That All Shall Be Saved, by David Bentley Hart, whose translation of the New Testament I wrote about here. His new book won't be published until late September, so I won't be doing a review of it until much closer to publication date.

But I can tell you that if Hart is right, and I think he is, the idea of an eternal hell for punishing people is deeply incoherent. That's not to say that in some way God won't seek justice and render judgment. But the traditional picture of people burning in agony for all eternity -- the image that the man on the radio was glad the other man was saved from two days before his death by "getting saved" -- is terribly difficult to sustain based on the biblical record. As I say, I will say more about that when I review Hart's book.

Is God a god of vengeance, mostly, or a god of love? And if the latter, is there room for eternal punishment? Some day we no doubt will know for sure. Hart is sure about what he thinks now.

(The image shown above today came from here.)

P.S.: BUFFALO, N.Y. -- I'm here this weekend for the annual conference of the National Society of Newspaper Columnists. And while I'm on the road I won't be adding the usual second item to the blog.