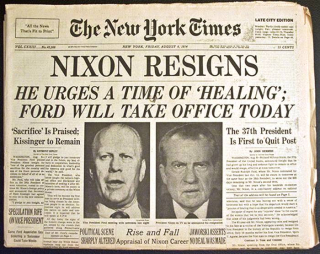 I'm not sure what good it does to compare such scandals, ranking them in order of odiousness. So I won't. But know that all kinds of people have been weighing on that comparison question for months and months. Just go to Google News and search on the words "worse than Watergate."

The point I want to make today is that there is a long, sad history of American government officials breaking trust with the American people by participating in various nefarious (my favorite rhyme of the day) schemes and scandals. Most of those people were, at least on paper, people of faith. Which means most of those people were willing -- at the right time and often for the right price -- to abandon the teachings about trust and honesty that their religions taught them.

Richard Nixon, for instance, claimed a Quaker background. Quakers, as you may well know, are known as being a peace religion. At their best, they teach peace, live peace, demonstrate what peace looks like.

Nixon's actions and words belied that background. And when he created a constitutional crisis by covering up the Watergate break-in, the result was that Americans lost even more trust in their government -- assuming there was much left to lose after Lyndon Johnson and his Cabinet regularly lied to the American people about various aspects of the war in Vietnam.

Nixon was properly accused of leading an imperial presidency in which he claimed that, in essence, the president was above the law, and if the president did it, it was not illegal.

Something of that same twisted spirit is alive and well in Donald Trump, who says he grew up as a Presbyterian, which is the denomination to which my congregation belongs. His scandals -- even if he eventually is never charged with a crime -- have contributed to the disillusion, though in a somewhat different manner from the way that Bill Clinton barely escaped conviction on impeachment because of his sex scandal. Americans seem to understand and excuse some consensual sexual scandals in ways they don't excuse scandals involving power and money and prestige.

In the end, nearly all of us look at these matters through the lenses of our faith traditions or at least through the moral standards we've learned and to which we've committed ourselves.

Imagine how much less damage would have been done to the nation and its sense of trust had Nixon quickly come clean about Watergate or had Ronald Reagan told the truth early on about the Iran-Contra scandal or had Clinton acknowledged his sexual escapades and had Johnson not lied to us about Vietnam. And on and on.

What all of this has required of us in the way of forgiveness or recommitting ourselves to the common good has been a heavy price. Heavy and avoidable, if people would behave according to the moral standards they profess. Is that too much to expect? Clearly.

FEWER BABIES BEING BORN TO MORMONS

For lots of interesting reasons, Mormons are having fewer children than they used to. This Religion News Service column explains why that's happening. As the story reports: "Bottom line: Mormon families are still larger than the nation’s, but the difference is smaller compared to what it was in the early 1980s."