Home Archives Profile
The cosmos is breathtakingly violent (and beautiful): 5-6-19
Seeing The Crusades in new detail: 5-8-19

In the year 2000, Kevin Hines (pictured here), then a 19-year-old college student in the Bay Area, concluded that the voices inside his mentally ill head were right: He was useless, he had no future, there was no reason to live and he should commit suicide. 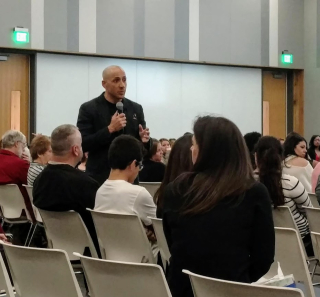 So he leaped off the Golden Gate Bridge. On his way down several hundred feet, he recognized he had made a grave error. So he prayed that God would save him "and I believe God did," he said one recent evening in a talk in Kansas City.

He was bashed and bruised but alive as he was rushed to a hospital. Today he lives with constant physical pain but spends his time traveling the country to educate people about mental illness and suicide.

Which is how he happened to speak the other night at Cerner as part of the "Mental Health Kansas City 2019 Conference," a gathering of mental health workers who, among other tasks, are seeking to intervene in what has become a growing phenomenon -- teen suicide. (If you missed the front-page Kansas City Star story Sunday about teen suicide, read it here.) The meeting was sponsored by the Metro Council of Community Behavioral Health Centers and Cerner, a large health information technology company based in Kansas City.

Hines said that the last person he spoke with on the bridge was a woman who saw this crying, distressed young man but instead of asking what was wrong or if she could help asked him to take five photos of her. Which he did. Then he jumped, concluding that no one cared, even though he says he "never wanted to die by my own hand." But he believed his mental illnesses of bipolar syndrome and severe paranoid delusion left him no choice, he said.

Among the many responsible adults who sometimes have opportunities to recognize the need for intervention to heal mental illness are members of the clergy.

I asked Hines whether he thinks such ordained people by now have been well enough trained to recognize when people need help and know how best to refer them to appropriate mental health professionals.

"I think that we're getting a lot better at this," Hines responded. It was two members of the clergy, he said, "who got me to tell my story in the first place." They were "phenomenal at bridging the gap between mental stability, mental pain and faith. So I think we're on the right path, but we have a long way to go."

One agency, based in Kansas City, that has paid attention to this issue is the Center for Practical Bioethics. This CPB page will connect you to various programs and resources.

But it's also important that individual members of congregations find out if their leaders are up to speed in this area. So don't hesitate to stir this pot. It might save a life -- yours, your child's or your grandchild's.

Scientists are warning in a new report that rapacious human activity threatens one million of Earth's eight million species with extinction. I'm guessing this is not what God had in mind when humans were told to "have dominion" over the planet.