The Enlightenment misshaped our politics and church: 5-17-19

In the last year or two, several good books have taken up the question of white supremacy and how it has infected -- and continues to infect -- Christian churches in the United States. 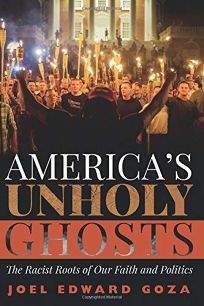 My most recent review of such a book, The Color of Compromise, by Jemar Tisby, was published by The National Catholic Reporter and can be found here.

As helpful as Tisby's book and other books have been, none of them dropped back to the overrated Enlightenment to find some of the destructive roots that have created the reality we see today -- a racially divided church in a racially divided country led by politicians who perpetuate racial stereotypes that make this divisiveness more severe.

That's the task that Joel Edward Goza undertakes in America's Unholy Ghosts: The Racist Roots of Our Faith and Politics.

Although the book is a little uneven in places and needed better copy editing, I think it's a must read for anyone who cares about the failure of predominantly white American Christian churches to be reliable prophetic voices against structural racism and its debilitating results.

When I review books, I make tiny dots in the margins of passages I want to refer as I'm writing. In this book, I marked 57 of its 182 pages of text, meaning that if I were to refer to all of those points that I consider important, this review would run from here to next Friday. Instead, I will do my best to highlight in summary form why I think this is an important book.

The author is a white writer and minister who works in Houston's inner city and who has come to have deep respect and admiration for the way that what he calls the "Prophetic Black Church" sees America clearly and calls it to abandon the white supremacy that defined the nation's beginnings and that has remained a toxic problem into today.

Goza wants to discover the intellectual roots of racism, of poverty, of injustice. To find them and to trace those roots from their origin in Enlightenment-period Europe to America today, he drops back centuries to consider the lives and work of Thomas Hobbes (1588-1679), John Locke (1632-1704) and Adam Smith (1723-1790).

Although I had read some of each of those men and had certainly read about them in the past, I found a lot in Goza's work that had never registered with me about how influential the ideas of Hobbes, Locke and Smith have been in creating American society today.

By reading these philosophers, Goza writes, "I started to see how slavery acted as an invisible hand shaping the founding ideologies upon which we built our nation, its churches, corporations and educational institutions." Looking at their work, he says, "we see how their ideologies coalesced into paradigms that not only justified the genocide and slavery of yesteryears but that through which Americans continue to understand faith and politics."

What were those "racist ideologies?"

There were, Goza writes, three political lies and three religious lies. Roughly these:

-- Government is not about the common good but mostly about protecting the property of individuals.

-- Economics is a moral-free math, and human equality "need not entail racial equity."

-- Justice is about "retribution, not restoration."

-- "True religion" is about saving souls for heaven, "despite the Old and New Testament teaching otherwise."

-- "Indifference to injustice is no threat to one's intimacy with God."

These lies were promoted in different ways by Hobbes, Locke and Smith, whom Goza deals with separately in some depth, though he acknowledges that each of them got some things right. But each of the three in various ways also sowed the seeds for what Goza calls "a rational and racial superiority" of white people. He especially argues that Hobbes and Locke were writing "a rulebook on modern slavery."

To ignore these three Enlightenment philosophers (and, no doubt, others) is, the author contends, to whitewash (the right word) "America's past and present."

There are many troubling influences that Hobbes, Locke and Smith contributed to their time and to ours, but in terms of Christianity, one of the most influential and distressing was the idea that the only thing in religion that really matters is personal salvation. That turned the Christian religion simply into a manipulative salvation system. And, Goza writes, it "produced a religion capable of experiencing two Great Awakenings and countless (Billy) Graham crusades without awakening true believers to the reality of our nation's racial sickness. . .From slavery to segregation to immigrant oppression, the military and the prison-industrial complexes and every war -- just or unjust -- the American church consistently found herself on the wrong side of social issues concerning people without white skin."

Sometimes Goza's charges are stated too broadly, as when he writes that "reducing 'true religion' to soul salvation brought an end to the prophetic tradition in America's white churches." Well, that may have been (and still is) true in many such congregations and denominations, but surely not in all. Although no doubt most if not all predominantly white churches have committed sins in this area of life, some also have tried to stand tall to be voices for love, mercy, compassion and racial justice. Still, Goza's mostly right.

In the end, the author insists that it's past time for white Christians to learn from their black brothers and sisters in faith and from the historic black church's prophetic tradition of speaking truth to power and loving the people Jesus called "the least of these."

"The question that faces white America during this time," Goza writes, "is whether or not white America is ready to learn a new way of being human by repeating the audacious loyalty of Ruth to Naomi (in the book of Ruth in the Hebrew Bible), 'Your people shall be my people.'"

It's the right question. So far the answer seems mostly to be this: "What? Would you repeat the question?"

(Related to all of this, today marks the 65th anniversary of the U.S. Supreme Court's Brown vs Board of Education case from Topeka that declared racial segregation in America's public schools to be unconstitutional. Here are some worthy thoughts about all of that from a Cornell University teacher. All these decades later, America still gets most of this wrong in de facto ways if not in de jure ways.)

For Ramadan, going on now, many Muslims, it's reported, are using the time to disengage from social media and over-dependence on their smart phones. That's something all of us could use -- a little down time from tech. As an imam quoted in the story to which I've linked you says, "If you think about it, the smartphone is a weapon of mass distraction.”

P.S.: My latest Presbyterian Outlook column now is online here, though you may have to be a subscriber to read all of it.