Home Archives Profile Subscribe
Silence in the face of evil is complicity in that evil: 5-14-19
When bad theology leads us astray: 5-16-19

For years now, the Catholic Church, sad to say, has been stung by the now-well-documented scandal of priests abusing children and bishops covering up for them. 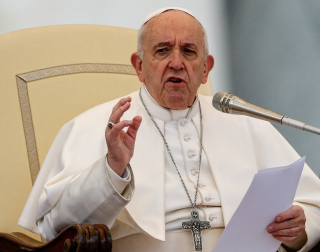 The church's response has been slow, too little and defensive. Beyond that, it has not done much to address the structural problems of the church that have contributed to the scandal, such as the failure to include the voices of women at the highest levels of the church.

But little by little the leadership of the church is moving in the right direction. For instance, late last week Pope Francis (pictured here) issued new global rules covering how to report abuse. I've just linked you to The Atlantic's story about this. And here is The National Catholic Reporter's story about reaction to the new rules.

The Atlantic's Emma Green writes this: "The pope’s moto proprio, which will take effect in June and remain in place as an experiment for three years, is a definitive and concrete step forward for the Church, demonstrating that Pope Francis is taking sexual abuse seriously. The new law is not a panacea, however: It does not detail specific punishments for Church leaders who violate these norms, and it does not mandate the involvement of authorities outside the Church." (Moto Proprio means the pope issued the rules on his own initiative.)

And the NCR account notes this: "While acknowledging some signs of improvement, abuse survivors and their advocates said the new measures did not go far enough. Specifically, they criticized the document for not creating a universal zero-tolerance policy for child sexual abuse or its cover-up — keeping the investigation process internal and not establishing clear penalties for those failing to report abuse or engaged in its cover-up."

At minimum, the new rules seem unclear about whether and when suspected abuse should be reported to law enforcement authorities. You may recall that it was former Kansas City Bishop Robert Finn's failure to do exactly that that got him convicted in court.

As badly as the church has been damaged by this scandal, you'd think that by now any response to it would be swift, thorough and protective of the vulnerable. Perhaps for some by now the church can do nothing that will be satisfactory. And no doubt this pope understands how sharp the opposition to him has become among some parts of the church, so he's perhaps a little cautious for that reason.

But when children are at risk, the internal politics of the church should be no consideration in protecting them.

The one thing the pope's new rules do is to keep this issue in the public eye. So good for that at least.

What looks like it will be a fascinating documentary about Jewish-Catholic relations and cooperation is about to be aired in Chicago -- and, I hope, elsewhere. It comes down to knowing people as individuals and fellow humans and then finding ways to respect the spiritual choices they make. Respect. What a concept.