Home Archives Profile Subscribe
Just who invented religion, anyway? 5-11/12-19
Silence in the face of evil is complicity in that evil: 5-14-19

How Pete Buttigieg is misusing religion: 5-13-19

One of the surprises so far in the crowded 2020 race for the Democratic presidential nomination is Mayor Pete Buttigieg (pictured here) of South Bend, Ind. 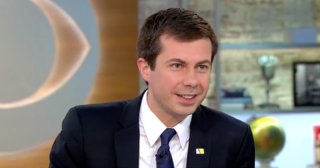 Seemingly out of Nowhere (which is a suburb of South Bend, I think), he has risen in early polling to be in the top tier, which in this race feels like it means the top 50 or so candidates, though it's really the top five or 10.

Not only has success despite his lack of initial name recognition been surprising, but so has the fact that he's openly gay. Beyond that, he's been speaking openly about matters of religion. He's quite firm about the fact that he's an unapologetic Christian. That's both an advantage in some ways in that it shows people can be both openly gay and Christian. But it's also a disadvantage in a society in which the percentage of people who identify as religiously unaffiliated has grown to about about 25 percent of the adult population.

But as this young (37 years old) candidate begins to find his sea legs, he's going to have to learn not just what to say, if anything, about faith but also what not to say.

As this brief CNN commentary noted correctly the other day, Buttigieg got that wrong recently.

"It's important that we stop seeing religion used as a kind of cudgel as if God belonged to a political party," Buttigieg told NBC's Craig Melvin. "If it did, I can't imagine it would be the one that sent the current president into the White House."

So Buttigieg is saying, gratuitously, that there's no way God would be a Republican.

Not only was it a foolish statement that suggested somehow that the eternal creator of the universe actually would think about joining an American political party, it was also completely unnecessary and politically stupid. All this kind of provocative language does is to anger a significant segment of voters to whom you are trying to appeal.

The debate about whether Jesus, Buddha, Muhammad or Plato would align with this or that American political party is simply a waste of time.

Which is not to say that it's useless as a person of faith to describe how this or that party's policies violate or align with your particular religious views. That task is actually important, as I suggested here the other day in this post about using our prophetic voices.

But trying to draft God into the GOP or the Democratic Party or any other party is divisive for no good reason. Stop it, Mayor Pete, or you're going nowhere in this race.

HEY, LOOK, PENCE GETS IT RIGHT

Vice President Mike Pence, addressing students at Liberty University recently, says that religious liberty is under assault. The surprise is that he was talking about religious oppression around the world, which is a terrible problem, not alleged religious oppression in the U.S., which is a mostly, though not quite a totally, a made-up problem. Let's hope Liberty's students didn't think Pence was talking about such silly stuff as the fabricated "War on Christmas" or similar nonsense.