Home Archives Profile Subscribe
Which direction are the 'Jexodus" people going? 4-5-19
A wise objection to state interference in religion: 4-8-19

Should religious voices have a role on college campuses? 4-6/7-19

Think about our many public and private universities and colleges that are not, at least now, directly supported by or attached to a particular religious tradition. 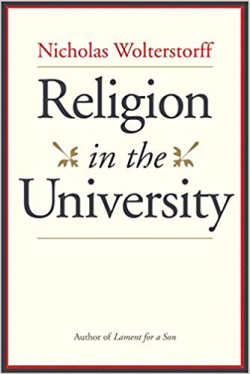 Is there a place for religious voices in such academic centers?

Nicholas Wolterstorff, an emeritus professor of philosophical theology at Yale University, makes the persuasive argument in his new book, Religion in the University, that the answer is yes. Or at least a conditional yes, as long as those religious voices aren't there primarily to convert others to their faith tradition.

Scholarship in such institutions of higher education, after all, amounts to what the author calls "an interpretive social practice." And in many ways, he writes, that's exactly what religions are -- they help interpret reality for their community of followers. They "are not just add-on beliefs about the transcendent but incorporate comprehensive interpretations of experience and immanent reality," he writes.

Wolterstorff is not interested in turning the University of Missouri, say, or Stanford or Johnson County Community College into seminaries or purely centers of the academic studies of religion. Rather, he's arguing that people with religious perspectives and commitments should have their voices heard in the academy. And that such schools should better reflect the growing pluralistic nature of the society around them.

In fact, he argues that if you look inside so-called secular universities, you find they aren't really secular -- "not in any plausible sense of that term." Many schools that once were religiously committed in some way, he notes, are no longer. Rather, they are pluralist in nature "in the sense that voices of a wide variety of orientations and character-identities are heard, religious voices among them, with none enjoying hegemony." Yale, he says, is such a place.

But others should and often do recognize the value of having religious voices included in the many voices heard on campus.

"The old reason for excluding religious orientations, namely, that they are intrinsically nonrational," Wolterstorff writes, "is no longer tenable -- it never was!"

This is not a book that I expect will be a big seller among people outside the academy. Both its subject matter and the academic way it's written no doubt will keep it off any best-seller lists. Indeed, some helpful editing might have made it more accessible to a broader public -- a public that should care about where religious voices are and are not heard.

As Wolterstorff points out, there's been a lot of interesting academic work in the field of religion in the last 50 or so years and "there is now a wealth of research and instruction explicitly shaped by the interests, values, convictions and sensibilities characteristic of particular social, ethnic, racial and gender identities: feminist epistemology, black sociology, liberation theology, gay literary criticism, Muslim hermeneutics."

So, he insists, there's no reason to keep people of faith who are doing this kind of work out of the academy. After all, the old arguments that religion is not a provable science but a collection of superstitions and irrational beliefs are more and more easily refuted.

I hope this book leads to some useful discussion on campuses across the country. And I hope word of that discussion gets disseminated beyond those campuses in language and terms that non-academicians can easily grasp.

The Church of Jesus Christ of Latter-day Saints is slowly changing its position on same-sex marriage to be somewhat more approving of it. It still has some distance to go but it's getting there. All of this has caused Mormon journalist Jana Riess to ask a good question: If the initial position and the later position both are said to be the result of divine revelation, what the heck is revelation? Let's see if church leaders have an answer.

P.S.: Again this year I'll be doing the AIDS Walk KC to raise funds for the AIDS Service Foundation of Greater Kansas City. For the April 26 walk, I'll be part of a team from my congregation, Second Presbyterian Church. I hope you can give us a hand in raising some money for this terrific foundation. Just click here and donate what you can. And thanks.