Earlier this week, here on the blog, I wrote about how important it is to know something of the cultural contexts in which the Bible was written if we are to have any hope of understanding with much clarity what the writers meant. 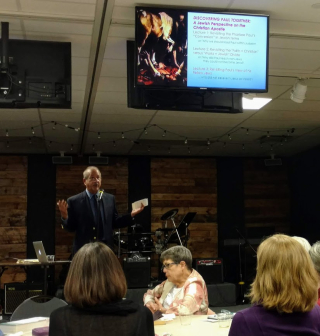 Just as many seniors today miss pop cultural references in conversations with millennials, including their grandchildren, so people who read sacred writ with no grasp of the times and circumstances in which those words were penned will be considerably more in the dark than people who have studied the history and social customs of the times in question.

Another thing that can shape and misshape our readings of the scripture of various religions is that we often come to the texts with assumptions about what we might find there or what is happening. These assumptions are picked up in lots of ways, including our own (often inadequate) religious education.

Mark D. Nanos, a Jewish scholar (pictured here) who focuses on the Apostle Paul, mentioned all this the other evening in the second of a three-part lecture series he's doing at the United Methodist Church of the Resurrection in suburban Leawood. The series, sponsored by a group of Jewish and Christian women called "Strangers No More," wraps up at 7 p.m. Tuesday at COR. If you want to attend this final talk, details are here.

(And if you want a brief synopsis of the work Nanos does, here is a column I wrote about him a year-plus ago for Flatland.)

"What you assume that you will find (in sacred texts)," Nanos said, "the questions you ask, the methods you use, the answers you're driving for" probably will shape your conclusions more than anything else. "That's the way our brains work."

But we must be aware of this tendency to assume we know what to expect from what we're reading so that we can check ourselves and see what's really in the text and not just what we imagine is, he said.

It's especially important, Nanos said, that the assumption-busting work he and others are doing about the Apostle Paul and the books of the New Testament get introduced to young readers because "the prejudices start then. The patterns start then."

For instance, in chapter 9 of the book of Acts we find the story of how Saul (later Paul) encountered the risen Christ on the road to Damascus, with the result that Paul abandoned his practice of persecuting the followers of Jesus and became a disciple instead.

The standard Christian misreading of that passage, based on long-held assumptions in the church, is that as a result of the experience, Paul rejected Judaism and converted to Christianity. Beyond that, this misreading suggests, once Saul changed his name to Paul, he then spread the Christian faith around the known world and became, in effect, the co-founder of Christianity.

Well, there are many things wrong with that assumption-laden interpretation, including the fact that Paul never rejected or left Judaism and that in his lifetime there was no Christianity for him to convert to. He remained within Judaism, but in that segment of Judaism that believed the Messiah had come as Jesus of Nazareth. When we get that wrong -- when, that is, we assume Paul left his Damascus Road experience a Christian -- it leads to all sorts of Jewish-Christian relations problems. That's partly because we assume that if Paul left Judaism there must have been (and continues to be) something wrong or irrelevant about it.

And from there we soon get the long history of anti-Judaism in what later became Christianity.

All of this is a good reason not to read sacred writ alone -- especially not sacred texts that are from traditions beyond our own. We are likely not just to miss a lot but to get a lot wrong, sometimes with terrible consequences. For instance, I can't tell you how many non-Muslims have quoted a line or two cherry-picked from the Qur'an to prove that Islam is a religion of violence. Muslims, of course, could cherry-pick a few lines from the Bible to prove, allegedly, the same thing about Christianity. This is not studying scripture. This is weaponizing sacred writ.

So Nanos is right about the assumptions we make when reading the Bible and other sacred texts. Such assumptions are hard to avoid, but we at least can be aware that we may be making them and ask for help in identifying what they may be.

Taking that path is much more likely to lead us to insight and helpful meaning.

The Internal Revenue Service has recognized The Satanic Temple as a tax-exempt religious organization. If, like me, your first reaction to this news was "Well, I'll be damned," you might want to rethink that.