Home Archives Profile
Are fundamentalists brain damaged? 4-25-19
How religious assumptions can mislead us: 4-27/28-19

It is a good guess that the original impulse behind religion was the sense of awe and wonder people felt when looking at the natural world, including the seemingly endless sky. 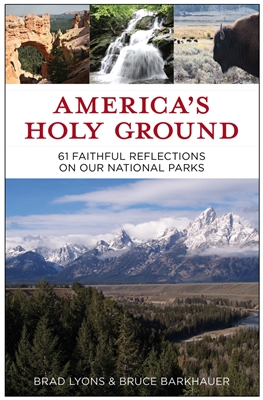 It may be possible for some people to stand at the base of mountains, to listen to what poet Wallace Stevens called the "slopping of the sea," to gaze at a double rainbow or to see a spectacular water fall and not wonder at how it all was created and at the power behind that creation. But I don't know how that's possible.

So far, Americans are able to see such humbling sites at 61 different national parks (not even counting various national monuments) scattered across this amazing land.

I have been to a few, though I must say I envy people who have made it a goal to see all of most of them -- and then accomplished that goal.

Brad Lyons and Bruce Barkhauer are in that see-them-all group and have written a lovely little devotional book full of graceful photos and brief meditations drawn from what they've seen.

It's called America's Holy Ground: 61 Faithful Reflections on our National Parks, and, while not a full guide to the parks, it is one way to enhance the experience of visiting the parks or to think about what those parks can teach us even if we can't be there. It's official publication date will be Tuesday but it can be pre-ordered now.

Lyons is president and publisher of Chalice Press, which is publishing this volume, while Barkhauer is a Christian Church (Disciples of Christ) pastor.

A brief example of what you'll find in the book: In the section on Acadia National Park in Maine (which is one I actually have seen), the authors note that "from early October to early March, this is the first place in the continental United States to greet the sun, so the beginning of each day is truly marked here."

They then offer some thoughts about the power of new beginnings in our lives and how we sometimes need them.

To say that many of the photos in the book are gorgeous would be true, but on the other hand it's sort of difficult to take a terrible picture in our national parks.

If I were about to visit one or more of our national parks (and may our government preserve them forever), I'd for sure take this small book along as a welcome companion.

MORE AND BETTER COVERAGE OF RELIGION

National and international journalistic coverage of religion is about to get quite a bit better. Religion News Foundation, Religion News Service, the Associated Press and The Conversation have just announced the creation of "a global religion journalism initiative." It's all thanks to a $4.9 million grant from Lilly Endowment Inc. Good. Given the role religion is playing for both good and ill now, such coverage is needed more than ever.