When we use the term fundamentalism in religion, it generally means a strict, literalistic approach to faith. Things are, in other words, all black and white and not gray. 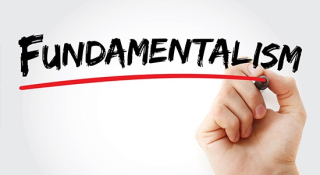 In Christian terms, the word fundamentalist goes back to a 12-volume set of books containing 90 essays written between 1910 and 1916. Called "The Fundamentals," the essays listed beliefs that the authors insisted every Christian should hold, no questions asked, in effect.

But given the complex, nuanced nature of the world, what would lead someone to become a religious fundamentalist? What, in other words, would attract someone to a rigid way of viewing life that has no room for disagreement, for conversation, for alternative ways of thinking?

Surprising -- to me -- new research suggests one possible cause: brain damage. As the story to which I've just linked you reports, the research "has shown that religious fundamentalism is, in part, the result of a functional impairment in a brain region known as the prefrontal cortex."

But before we dismiss all fundamentalists in this way, let's also pay attention to what the people who did the study say. As the story reports: The authors emphasize that lack of "cognitive flexibility and openness aren’t the only things that make brains vulnerable to religious fundamentalism. In fact, their analyses showed that these factors only accounted for a fifth of the variation in fundamentalism scores. Uncovering those additional causes, which could be anything from genetic predispositions to social influences, is a future research project that the researchers believe will occupy investigators for many decades to come, given how complex and widespread religious fundamentalism is and will likely continue to be for some time."

Well, you can read the details for yourself. But I think it's worth doing this sort of research because of the reality that fundamentalism in any religion can be a dangerous approach that ignores good scholarship and helpful challenges to orthodoxy. (I make several points about all of this in my last book, The Value of Doubt.)

In its worst forms, fundamentalism can lead to a special kind of ignorance that spawns bigotry and even violence. And surely there's enough of all that in the world now.

A DENOMINATION HOLDS ITS BREATH

As I mentioned in this Flatland column that posted on Sunday, United Methodist churches are awaiting decisions this week from the UMC Judicial Council about the constitutionality of the recent vote by the UMC's governing body to reaffirm the denomination's anti-LGBTQ stand. Here's a Religion News Service piece about what's at stake (a lot).