As those of us who are Christian celebrate Easter this weekend, I want to share with you a book that offers a different sort of hope, but hope nonetheless. 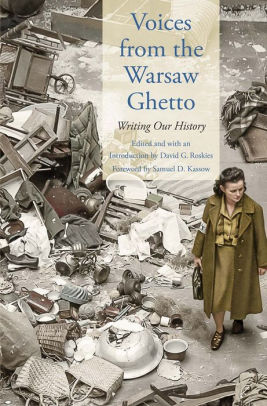 It's Voices from the Warsaw Ghetto: Writing Our History, edited with an introduction by David G. Roskies, who teaches at the Jewish Theological Seminary.

As it became clear in 1940 that Germany's Nazi killing machine was brutalizing Europe's Jews (though the ultimate scale of the Holocaust still could not be imagined), historian Emanuel Ringelblum organized a bold, marvelous project. He asked Jews, especially residents of the Warsaw Ghetto, to write about their lives and he arranged a secret collection system to save their words.

Against all odds, many of those words survived to tell the ghastly, murderous story of what happened to individual lives, day by gruesome day.

This new book, to be officially published this Tuesday, collects some of the most poignant writing, all of which is set in context by Roskies' insightful introduction.

As Samuel D. Kassow, who teaches history at Trinity College, notes in his foreword to the book, "Ringelblum wanted the archive to penetrate the microcosms of ghetto life, to enter the communities of the courtyards and the house committees. He wanted writing that recorded the pulse of Jewish life and the flow of Jewish time."

And, of course, it had to be done now. Not tomorrow. The writer of an entry today may be deported to a death camp tomorrow. Or may die of starvation or overwork or one of many diseases running rampant through the ghetto.

The collection of writings was called Oyneg Shabes, which is translated as "Treasure of the Sabbath." Roskies notes that "1,693 items comprising 35,000 pages were recovered from the Ringelblum Archive alone. So it is through paper that today one can conjure up the people anew -- through all manner of minutes, memoranda, diaries, memoirs, last letters, essays, poems, songs, jokes, novels, stories, plays, questionnaires, charts, scholarly treatises, sermons, classroom compositions, diplomas, proclamations, posters, photographs, drawings and paintings." Seventeen items from what Roskies calls "that profusion and confusion of voices" were chosen for this book.

Roskies says that the "authors wrote in various ways. But all the monographs express the tragic sufferings of the Jews. . ."

To me, one of the most intriguing documents in the book is called "Signs of the Messiah." In it, Shimon Huberband, a rabbi (1909-1942), describes how as soon as World War II started on Sept. 1, 1939, "all the Jews were confident that the Messiah and his redemption would come" the next year. As has always happened with Christians who predict the date for the end of the world, the Jews in Poland were consistently wrong about their ever-changing dates for the Messiah to come.

But the clues they used are fascinating and were readily exploitable by people who had various reasons for announcing the dawning of the messianic age.

In the end, this is a book of hope because it shows that even in the face of something so evil and cruel as the Holocaust, there were ways to act in human and humane ways -- ways that rescued at least part of history. It is hard to imagine all that we would not know about the human spirit in that dark time if these documents had not been hidden away and eventually found.

AND SOMETHING ABOUT A DEAD GUY, TOO

This seems to be where we are in our culture when it comes to Easter -- the lead on this USA Today article says this: "There's more to Easter than dyed eggs, jelly beans and brunch. There's television. And movies." Oh, goody. Anything to keep from thinking about the story of resurrection, right? Yikes.