Home Archives Profile Subscribe
The benefits of a concept of oneness: 4-18-19
Their unique voices were saved for us: 4-20/21-19

I confess that despite the fact that I think environmental degradation may be what most threatens the future of humanity, I have paid almost no attention to the so-called Green New Deal proposed by Democrats in Congress. 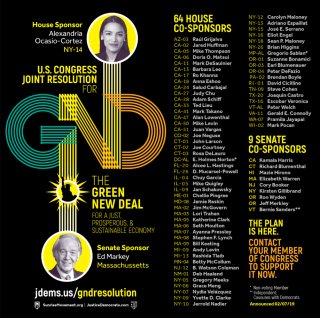 My excuse of being too busy sounds hollow, though it's true, so I'll just tell you that I have been essentially unaware of the proposal's details but have been aware that it has stirred up considerable debate, some of it predictably nasty.

So once again I turned to long-form journalism to help me grasp what this is all about, how it fits into a historical context and particularly why people of faith who care about being good stewards of the gifts of nature should be part of this discussion.

This cover piece in the current issue of Harper's Magazine lays out a lot about how the U.S. dealt with some environmental catastrophes in the past and why it's possible for us to do so again -- whether guided by the Green New Deal or, maybe more likely, something else.

After reviewing in detail how America came up with the Tennessee Valley Authority and reacted to the Dust Bowl, contributing editor Kevin Baker writes this: "We must address climate change, and we must transform the way our political and economic systems work in this country — just as we did during the Great Depression. There is no way to do one vital thing without doing the other."

But then Baker adds this: "The political establishment, even within the Democratic Party, doesn’t seem to understand this. . .

"Part of responsible leadership is alerting people to looming problems and rallying them to do something — and in this crisis, as in so many, much less would have needed doing if we had done it sooner.

"When the federal government realized, more than a hundred years before the Dust Bowl, that much of the Great Plains did not have enough water to support standard, Eastern agriculture, the right thing to do was not to acquiesce in the Big Railroad lies about rain following civilization because that was what struggling farmers wanted to hear.

"We have known that man-made, preventable climate change is happening for a long time. Scholars have been predicting global warming in some form since the nineteenth century; Alexander Graham Bell, perhaps the most revered scientist in America at the time, wrote on the subject in 1917. Edward Teller, the 'father of the hydrogen bomb,' famously warned oil executives about climate change in the late 1950s, and President Lyndon Johnson’s science advisory committee issued a report highlighting the potential dangers in 1965. James Hansen’s five-alarm testimony before Congress came in 1988, and Al Gore’s Oscar-winning documentary, An Inconvenient Truth, came out in 2006. 'Decades away,' Mr. President? Our discovery of climate change is now decades behind us, and still we do nothing."

As for the details of the Green New Deal, in the first paragraph above I've linked you to a New York Times explainer that should help.

For people of faith, the cosmos, including Earth itself, is understood to be a divine gift that humanity has been deputized to care for -- despite the unfortunate wording in the King James Version of the book of Genesis that humanity should have "dominion. . . over every living thing that moveth upon the earth," suggesting that Earth and all that dwells here be whipped into submission for humanity's self-centered wishes.

But people of faith haven't been as insistent about ecology as they need to be and, when they have spoken out, they often haven't been taken seriously.

It's time to educate ourselves about all of this, and this Harper's piece can be a good place to start. Or start with this RNS column saying that fixing climate change will require a cultural change -- one most Americans, including our leaders, seem loathe to undertake.

In honor of Passover, which begins this evening, here's a story from Philadelphia about a congregation that is using rap to draw young people into the overriding story of a people going from oppression to liberation. If you don't adjust to the times, the times will walk away from you.