Home Archives Profile Subscribe
Our genetic future no longer is in the future: 4-15-19
Should the Census Bureau ask about religion? 4-17-19 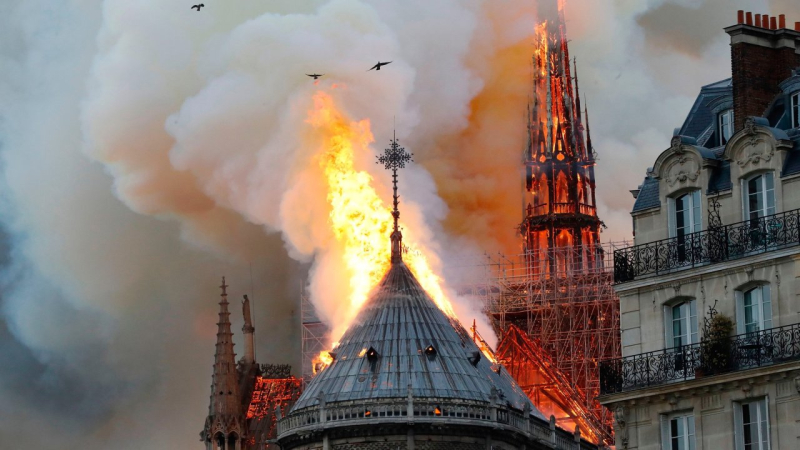 Like many people, my heart was wounded when I heard about Notre Dame Cathedral catching fire yesterday. In honor of that amazing old building, I'm reprinting today a January 2000 column I wrote about the cathedral from Paris. You can find this Kansas City Star column in my first book, A Gift of Meaning.

The headline, which now seems sadly ironic, was this:

In an Uncertain World, a Source of Constancy

I am sitting in a small area near the main altar toward the front of the great sanctuary. The few dozen seats here are designated for people who wish to pray and are not just for tourists who have come to gawk at this twelfth-century monument to the divine.

So I pray, no doubt in a way that the faithful have prayed here for hundreds of years and the way they've prayed around the world throughout the two thousand years since Christianity branched itself off decisively from Judaism.

But I do not only pray. I also observe. And I think about the way in which the practice of this faith connects people across miles and centuries -- people of incredible variety but all rooted in a Middle Eastern peasant by whose life our very calendar is figured.

This evening two men in dark suits, ties and sweater vests are preparing the cloth for the altar and making other arrangements for a later worship service. Like chambermaids changing sheets, they flap and float the white cloth in the dark, candled air, before letting it settle on its holy place for the Mass.

Then, while one places candles in tall holders, the other checks the connection on the electrical cord to the microphone attached to the lectern. The cord, some awkward accommodations to modernity, is taped to the floor with what looks for all the world like duct tape.

Maybe that's part of what it takes to hold together a world religion -- duct tape and what it represents: a willingness to adapt to the times to spread the steady word of hope that faith would speak to a troubled, skeptical and distracted people.

On a pillar behind me is a plaque in French recording evidence that the faith represented by this huge stone cathedral is directly connected to the branch of the religion with world headquarters in Rome. The May 30, 1980, visit to Notre Dame by Pope John Paul II (Jean-Paul, in French) is commemorated on the sign. This pope, now near the end of his long and important reign, took time nearly two decades ago to pay homage to the French people and to this famous symbol of the Roman Catholic vision of Christianity and those who pledge allegiance to it.

No doubt part of his reason for coming was that Notre Dame represents the faith that has survived these two millennia and that now claims one-third of the world's population as adherents.

I do not mean that its beginning was similar to the start of the faith. No, Notre Dame, though built in stages (beginning with a foundation stone laid by Pope Alexander III in 1163), was, even at its start, an architectural dream of huge proportions. That very size makes Notre Dame unlike the faith, which began with a tiny band of Jewish people in the backwaters of the Roman Empire -- people who, whatever their hopes, could not have envisioned a French cathedral or a worldwide (if lamentably divided) fellowship of the faithful.

But just as there is a core to the religion -- the life, death and resurrection of Jesus Christ -- so there is a core to Notre Dame. That centrality, at least viewed from the outside, is the big-boned, imposing presence that has stood for the faith's core, even as the city around the cathedral changed in breathtaking ways in response to history's often cruel, bruising, though sometimes celebratory evolution.

In the evenings now, the streets of Parish around Notre Dame are filled with small Peugeots and Renaults and Citroens and large tour buses. The lighted sidewalks are packed with tourists who seem to get drawn into the front entrance of the cathedral the way iron filings are attracted to a magnet. And the River Seine, along the edge of the grand edifice, provides a way for tourist boats to shine spotlights on Notre Dame as they pass.

So the building, like the faith, has survived. Inside now there is electricity, and you can buy postcards from small gift shops and souvenir medallions from vending machines. but the essence of Notre Dame is the same as it has been for centuries, just as the essence of the faith is the same two thousand years after the birth of Christ.

And in a world that seems to uproot nearly everything every two weeks, the constancy is enough to steal my breath.

May the old structure be fixable. And may the hearts of the French (and the world) heal.

THE MORALITY OF ARTIFICIAL INTELLIGENCE

As Artificial Intelligence plays a larger and larger role in our lives, I'm glad to see some people raising questions about whether it is a morally neutral technology. This RNS story describes a conference hosted by the Southern Baptist Convention’s Ethics and Religious Liberty Commission that considered some questions about that very subject. AI may, indeed, be a wonderful technology, but as we know about other technologies, there are moral and ethical reasons for caution.