It has been clear for a decade or three that the number of American adults who identify as religiously unaffiliated has been growing. By some measures, this group, called the "nones" for choosing "none of the above" from a list of religions, makes up nearly a quarter of those adults. 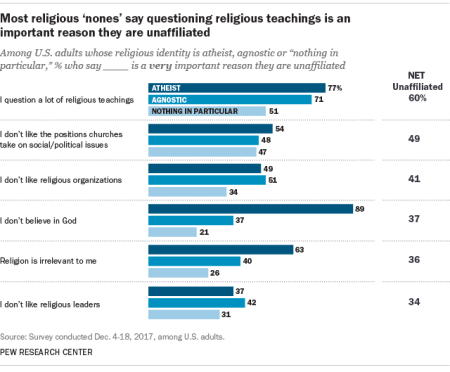 "The shift," the RNS piece says, "could signify coming political changes. Evangelicals often lean conservative and are known to have outsized influence on American elections: According to exit polls, white evangelicals alone made up 26 percent of the electorate in 2016, even as their share of the American population has dipped far below that, according to Public Religion Research Institute. . .

Well, the political ramifications of a growing group of nones are interesting, but I'm frankly more interested in what faith communities are doing to attract such folks and meet their spiritual needs.

One answer at least for Christianity has been the recent growth of so-called "dinner churches," a phenomenon I wrote about here. Like the early church, these gatherings include a meal that is at least representative of the Communion meal. They don't do worship in the traditional sense but, rather, offer programming and spiritual resources to people who seem uninterested in traditional worship.

The dinner church that my congregation started some four years ago, The Open Table, has seen its attendance climb dramatically -- from 15 or 20 at the start to sometimes as many as 175 now, though its average attendance is closer to 80 or so.

Dinner church may not be a good model for all faith communities seeking renewal and growth, but what the model does show is the need to experiment. With that attitude, failure just means you have learned one more thing that doesn't work, which is getting you closer to something that does work.

When worshiping communities fail to respond to social changes around them, they eventually lose the ability to communicate their eternally valid messages to anyone. And that seems pretty self-defeating.

Now another faith community is in the news for its terrible handling of allegations of sexual abuse against children. This Atlantic report says the Jehovah's Witnesses have kept a secret file about such abuse in the church's ranks for years. The church, the report says, has built "what might be the world’s largest database of undocumented child molesters: at least two decades’ worth of names and addresses — likely numbering in the tens of thousands — and detailed acts of alleged abuse, most of which have never been shared with law enforcement. . ." Stunning, especially in light of similar scandals in other faith communities. As the old song asked: When will they ever learn?

P.S.: What a lovely bit of news I just received. The Greater Kansas City Interfaith Council will give me its Steve Jeffers Interfaith Service Award at its annual Table of Faiths dinner on Tuesday, April 30. At the same dinner the Crescent Peace Society will receive the annual Table of Faiths award. The link I've given you will tell you what you need to know to get tickets to attend.