The U.S. Supreme Court now must decide whether a huge cross on public land (pictured here) in Maryland violates the constitutionally rooted principle of separation of church and state. 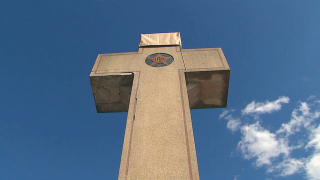 It heard arguments about the case yesterday. A decision is expected by or in June.

At issue is a World War I memorial in the shape of a giant cross. It's been around a long time, but it's being challenged because it uses a religious symbol on park land.

You can read about the case in the stories to which I've linked you in the first and second paragraphs.

Instead of my focusing on the details of the case here today, I want to raise the broader question of why people of faith should ever want to turn their most sacred symbols over to the government to display.

For Christians, such symbols include the cross, the manger scene, the Communion cup and more.

Over the years there have been various court cases to decide the constitutionality of displaying some of those symbols on such places as courthouse lawns along with such secular symbols as Frost the Snowman, Rudolph the red-nosed reindeer and Santa Claus.

To place the Jewish Menorah or Star of David or Islam's crescent moon in a public display with other secular symbols would be to suck the religious life out of them. It's the same with a large cross displayed on public land. Whether such display constitutes a government endorsement of religion is a fairly narrow legal question.

But whether such display constitutes a denigration of religious symbols is easy to answer: yes. That may not be the issue for the court, but it's the issue for people of faith.

WHY THE CROSS IS A RELIGIOUS SYMBOL

Staying with this topic today, here is an essay co-authored by a Christian and a Jew, who argue that it's foolish to think that the big cross in Maryland that's the subject of this case is secular. They're right.