Home Archives Profile
Why this Bible translation stands out so clearly: 2-2/3-19
A French church invites us to dream big: 2-5-19

I have not yet read Nadia Bolz-Weber's new book, Shameless: A Sexual Reformation, but I did hear her speak about it at my church a few nights ago and heard her read a bit from it. (My bride took this photo of her in our sanctuary.) 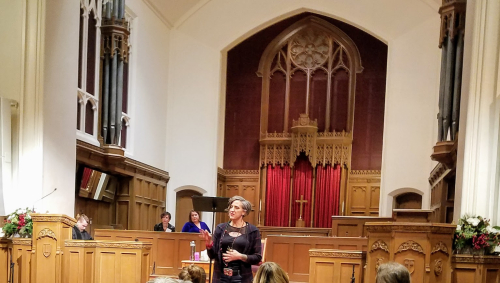 This innovative and kicky (by which I mean she'll drop the occasional F-bomb in church, and like that) Lutheran pastor has made her mark in the world through her writing and the church she started in Denver. Her argument in this new book is that the world needs "a new Christian sexual ethic."

Religion, she argues, needs to take sex more seriously as a divine gift and then lead a new conversation about it that can result in relationships based not simply on mutual consent or on old rules that didn't make much sense years ago and make less sense now: "A Christian sexual ethic must offer more than that." Christians must draw from the Bible to find a sexual ethic that, beyond mutuality and consent, includes "concern" for the welfare of the other person. This kind of approach, she insists, would show that religion is concerned about "the sexual flourishing of all people."

That "concern" is not a weak word. Rather, it means putting the needs and desires of others ahead of our own so that in all cases we don't exploit a sexual partner even if that partner seems to be consenting or at least not saying no. It boils down not just to an ethic that requires us not to harm others but, rather, an ethic that requires us to support and love others.

Bolz-Weber is right, of course. But she has touched on the primary issue that makes Christianity (and, really, all the world's great religions) so hard to live out in a faithful way. Which is to say this: The command that we love God with all our heart, soul, strength and mind and that we love others as we love ourselves is, as Nadia might say, effing hard.

For Christians, loving others means that we are required to see Christ in others and treat others accordingly. This includes people we don't even like. It includes people who may harm us, may not have our best interests at heart.

But a commitment to living in that way is not meant to be an occasional thing. It is meant to transform our lives in radical ways so that we may help transform the world.

And our bedrooms are not a bad place to start working on this.

By the way, I asked Nadia who among theologians at universities or seminaries was doing good work along the lines of her new book, and although she didn't have an answer for me, a few other people after her talk suggested work by these people: Peter Enns, whose new book due out Feb. 19 is How the Bible Actually Works; Ken Stone, Theodore Jennings and Susan Thistlewaite, all of Chicago Theological Seminary; a Jewish theologian named Judith Plasgow, and David Cheng, assistant pastor at a California church.

A PROBLEM FOR CHARITIES

Studies suggest that religion makes people more charitable. As this Philanthropy Roundtable piece puts it: "In study after study, religious practice is the behavioral variable with the strongest and most consistent association with generous giving. And people with religious motivations don’t give just to faith-based causes — they are also much likelier to give to secular causes than the nonreligious. Two thirds of people who worship at least twice a month give to secular causes, compared to less than half of non-attenders, and the average secular gift by a church attender is 20 percent bigger." So as the new federal tax law with its enlarged standard deductions may hurt philanthropy, so, too, may the decline in religious affiliation among adult Americans. Who, in the end, will do the necessary work charities do now? Good question.