All of us have repetitive ways of doing things. Some are just habits, but some are infused with deeper meanings and become rituals. 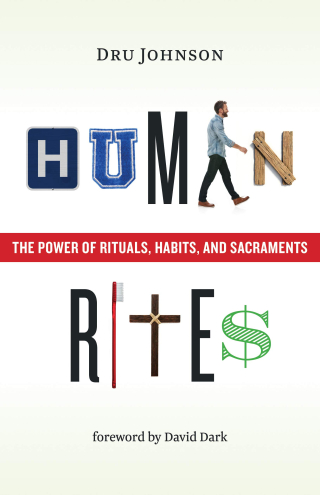 One of my habits is to have cranberry juice on ice to accompany my breakfast almost every morning. It's a tasty, healthful way to start the day. But it doesn't have much, if any, spiritual weight or content. It's just a good habit.

At the end of almost each day, however, my wife and I say a short prayer made up of a few lines from an end-of-day Episcopal and Catholic service called compline. We started this by phone even before we were married more than 22 years ago. It grounds us and connects us with eternal meaning.

That's the kind of ritual that Dru Johnson, a pastor and theology teacher at The King's College, writes about in Human Rites: The Power of Rituals, Habits and Sacraments.

Johnson's new book is a call to pay attention to our rituals, understand why we do them, who authorizes them and whether they are moving us in the right or the wrong direction. Some repetitive actions, after all, can become false or destructive rituals, and they're easy to fall into unless we're being mindful and discerning. And, he insists, "our world breathes with rituals."

The first thing he does is to note that often people think of rituals as empty actions without meaning. But, he argues, "rituals are so foundational to our lives and society that it's ironic how negative we have become towards them. Even learning rote rituals can help us think more clearly or save our lives."

Rituals, in fact, can and often do form us. Which is why it's so vital to pay attention to the ones we're using, even using mindlessly. And that includes religious rituals: "We can listlessly float along in a sea of inherited rituals," he writes, "or we can become discerning practitioners of the rites that shape our vision of reality, of God and of self."

Because of Johnson's background, he focuses on Christian rituals, but much of what he says about them can be applied to the rituals of many faith traditions and even to secular rituals.

"After all," he writes, "intentionally embracing valid rituals can shape us for good, but uncritically embodying rituals handed down from dubious voices cannot end well."

Johnson, however, suggests that there may be times when we may not need to grasp a ritual in depth for it to do us good: ". . .maybe we don't need to understand how rituals work on us in order for them to work in us." Ideally, however, he says, rituals should let us "see more truly." That's because "rites always have an invisible arrow through them, pointing toward something else."

This is a helpful book but I think it should be read in partnership with Caring Liturgies: The Pastoral Power of Christian Ritual, by Susan Marie Smith. That 2012 book will help you understand when and why you should actually create new rituals and how they can be healing. Together, these two books, ingested together, may change your thinking about rituals in useful ways.

The most senior Catholic cleric ever accused of sexual misconduct with children, Cardinal George Pell, has been convicted in Australia. If and when this scandal finally ends, the church is going to look like it was the site of a major battle in a world war. How sad.

P.S.: Both the Catholic and the United Methodist churches have just wrapped up major meetings to discuss matters of human sexuality. Come back to the blog tomorrow and I'll try to explain why I found the results of both gatherings to be severely disappointing.

ANOTHER P.S.: The Greater Kansas City chapter of Hadassah is offering a session on human trafficking from 2 to 4 p.m. on Sunday, March 10, at the Jewish Community Center. The link I've given you (and the flier below) will tell you what you need to know to attend.