If you have paid even modest attention to the Arab-Israeli conflict (and the subset of that, the Israeli-Palestinian conflict), you know that absolutely nothing about it is simple. 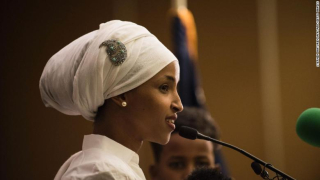 Beginning with the roots of modern Zionism in the 1800s and then with the creation of the modern state of Israel in 1948, it has been difficult for even the most attentive people to draw hard conclusions about what is happening there, why it's happening and who is to get the blame or the credit.

With that as background, I'm getting into the recent controversy today over a tweet from Rep. Ilhan Omar, D-Minn., (pictured here) considered by many to be antisemitic. Among many other questions, her words raised the issue of whether criticism of Israeli government policy and action is ever or even always antisemitic. (My answer is no.) And it raised the question of whether support for the cause of the Palestinians is ever or even always antisemitic. (Again, my answer is no.)

But as this Vox piece notes, there is plenty of antisemitic history and there are antisemitic dog-whistles that aren't all that difficult to recognize -- words, phrases and ideas that refer back to the core ideas behind modern antisemitism, which falsely postulates that greedy Jews try to control the world. Modern antisemitism, by the way, differs from historic anti-Judaism, which is the bigoted theology that traditional Christianity has preached and taught for most of its existence. My essay about that matter is here. Read it and weep.

What triggered widespread criticism of Omar was that she accused a pro-Israeli lobbying group essentially of paying members of Congress to support the Jewish state. As she wrote, "It's all about the Benjamins," a reference to $100 bills.

The antisemitic stereotype in that remark is clear and offensive to anyone who knows anything about modern antisemitism. There were much better ways of raising the question of whether lobbyists in general have too much influence and power on Capitol Hill, as surely they do.

As the Vox piece notes, Omar's comments allowed Republicans to draw parallels between her and such GOP embarrassments as Rep. Steve King, who has said indefensible things about white nationalism.

And Vox also noted this about the GOP response to Omar: "Lest you think any of this is happening in good faith, recall that (Rep. Kevin) McCarthy (a Republican) himself in October was accusing three Jewish Democrats of trying to 'buy' the 2018 midterms. . .Nonetheless, the issue of Israel remains deeply — indeed, almost uniquely — divisive in the Democratic Party."

Well, charges of racism, sexism and antisemitism fly about pretty loosely today, which is certainly not to say that those odious "isms" don't exist. They surely do and must be condemned.

But in all cases, let's remember the context, including the relevant history, before we throw accusations around. Omar clearly messed up, and I hope she's right that she's learning from this experience. But by condemning her words, let's not condemn opposition to any lobbying group for any cause that seeks to take control of our legislative process and thereby subvert our democracy.

A big United Methodist Church in South Carolina indicates that if the denomination changes its policies on LGBTQ folks to become more open and inclusive, it will leave. It's inevitable. It happened in my Presbyterian denomination, too, when we finally changed our rules in 2011. But like pro-slavery churches before the Civil War, eventually such churches will discover they've been misreading scripture and return to the mainstream of the faith. But only after lots of people are hurt. Sigh.

Who Is My Neighbor, by Amy-Jill Levine and Sandy Eisenburg Sasso, illustrated by Denise Turu. This is another in a series of terrific books that retell the parables of Jesus in new ways for children. Previous books in the series include The Marvelous Mustard Seed and Who Counts? In this new one, the lesson about being a neighbor even to the most needy and even the scariest of people is told through the story of the Blues and the Yellows, two groups of beings deeply distrustful of each other. Until, that is, a young Yellow overcomes fear and helps a young Blue in trouble. They both learn that they actually like each other, and the generative word spreads to their separate communities to good effect. Levine, who teaches New Testament at Vanderbilt, has written some marvelous big-people theology books, including The Misunderstood Jew: The Church and the Scandal of the Jewish Jesus. Sasso, a rabbi, teaches at Indiana University-Purdue University. The Turu illustrations in this volume should draw children in immediately. They're wonderful.