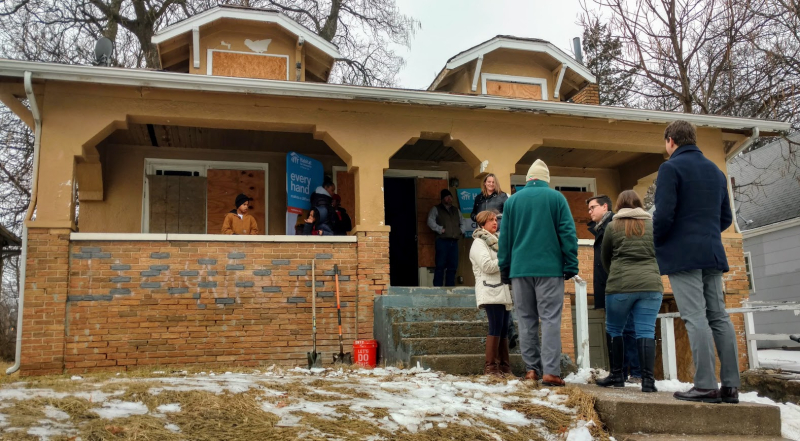 Several times in recent years I have written about the terrific interfaith work being done through Habitat for Humanity in Kansas City, including in this Flatland column. A project called the House of Abraham, which involves Christian, Islamic and Jewish congregations, has built or rehabilitated six houses. And this past Sunday, project leaders marked the start of the seventh home, this one in the 7100 block of Bales.

This is exactly what interfaith cooperation should look like.

"We bring people together," Pat Turner, president and CEO of Habitat KC, told the group. In fact, 28 different congregations around the metro are supporting this rebuild in some way, including providing volunteers to work alongside the new owner, a mother with four children.

This particular house has been vacant for some time and it wound up in the hands of Wells Fargo Bank, which donated it to Habitat. It needs lots of work, but Huntz said he hopes it will be ready for the family to occupy it by this summer. If you or your congregation want to help with this or other Habitat projects, click on this Habitat contact page.

One of the important things that happens in this kind of interfaith work is that people of one religious tradition get to know people of another tradition in an up-close way as they work together toward a common goal. And that goes a long way toward alleviating fear and inaccurate perceptions about others.

(The woman in the light coat in the top photo is Pat Turner. The man in the green jacket is Jude Huntz, Habitat's faith outreach coordinator. The man in the dark jacket facing away from the camera is mayoral candidate Phil Glynn, who came to show support for this kind of community betterment work.)

(In the photo at left, that's the Rev. Larry Ehren of St. Mary Magdalene Episcopal Church in Belton, Mo., on the right. The home's eventual owner is behind Pat Turner.)

WHAT'S WRONG WITH THE SEMINARIES?

If some Catholic priests in the U.S. have been in all kinds of trouble in the sexual abuse scandal, one question to ask is who educated and spiritually formed them. One primary answer is the seminaries. Father Thomas Reese, a well-known Jesuit priest, says many seminaries are failing in their duties and need to be reformed. No doubt. But it's also true that Protestant seminaries are struggling to find their sea legs in a time of decline and upheaval in the Protestant world. How are seminaries in your tradition, if any, doing? If you don't know, it's time to find out.